Portugal: What are the prospects for tourism in 2021? – By Len Port 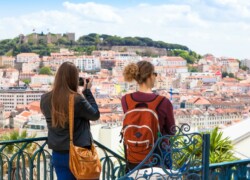 There is so much uncertainty about Covid-19 that it’s impossible to predict how tourism will pan out in Portugal or anywhere else this year, but there are pieces of positive information that give rise for some optimism.

All sections of the Portuguese tourist industry, which is of huge economic importance to the country, have been deeply impacted. Resorts, hotels, B&Bs and rental holiday homes, as well as food and drink services, entertainment and cultural facilities, were shattered by the absence of holidaymakers in 2020.

“It’s not too early to think about travel in 2021,” according to a recent report by the Brussels-based European Travel Commission representing travel organisations in 33 countries. The report continued: “The coronavirus pandemic won’t last forever.  Once enough people have been vaccinated, the spread of Covid-19 could ease, and you’ll be in a better position to make plans.

The Commission, led by an elected Portuguese member Luís Araújo, expects to see “a cascade of travel bargains late this year as airlines, hotels, rental firms like Airbnb, tour companies, cruise lines and destinations try to make up for a disastrous 2020.”

Southern Europe is seeing stronger domestic demand, which will offset some, but not all, of the hit to revenue, according to Bloomberg news. They quote Portugal’s Pestana Hotel Group chief executive officer José Theotonio as saying rooms in his January sales this year were snapped up by locals, as ongoing fear of travel bans and quarantines deterred foreign visitors.

In 2019, Portugal welcomed nearly 13 million visitors from abroad, mainly from the United Kingdom, Spain, France and Germany. The most popular mainland destinations were Lisbon, the Algarve and Northern Portugal. About 1.6 million visited the island of Madeira and 383,000 the other Atlantic autonomous region of the Azores archipelago.

The UK has meanwhile advanced far more quickly than any of the countries in the European Union in administering Covid vaccines and the numbers of infections and deaths are now falling significantly. This raises hopes that its strict lockdown measures can be eased, allowing foreign travel, possibly as early as Easter but more likely in summer.

Among those expressing optimism in recent days has been Prime Minister Boris Johnson. He said he thought easing the hospitality sector in the UK could “prudently and cautiously” follow the opening of schools on March 8 and then the reopening of non-essential retail businesses.

It’s currently illegal for UK citizens to travel abroad on holidays or for other leisure purposes, but the government has announced it may lift its red alert travel ban to certain countries, including Portugal, at very short notice.

The Azores international airline SATA has announced the resumption of direct flights from 3rd June between Stansted in London and Ponta Delgada on the island of São Miguel. These flights will be three times a week  –  Thursdays, Fridays and Sundays  –   with plans for onward links to Madeira, Boston, Montreal and Toronto. Discounts are being offered to those booking before March 14.

While the European Travel Commission is expecting a slow return towards normality this year, it is not anticipating a full recovery until 2023.

Under pre-Covid conditions, Portugal could expect about two million visitors from Spain this year, much the same as from the UK. However, January was the worst month in Spain for Covid infections and deaths since last summer. Emergency restrictions remain in place and the border between Spain and Portugal is still closed to almost all traffic by mutual government agreement. The closure of the eight border crossing points was extended from February 10 to the first day of March.

In France and Germany, where the vaccination programmes got off to a slow start, travel associations say customers would very much like to book holidays, but are reluctant to do so. For most of their would-be holidaymakers, things are only expected to start improving in late May. Encouraging for the Algarve and other parts of the mainland and islands rich in biodiversity, are the numbers of potential French and German visitors keen on ecotourism.

While few summer holidays abroad have been sold so far in the UK, Spain, France, Germany or anywhere else in Europe, the tedious lockdowns are stoking desires to get away. This may mean holidays limited to domestic destinations. Realising desires to travel abroad will depend not only on restrictions being lifted in their home countries, but also restrictions in their planned destinations.

Many of those who would like to get away this year cannot afford to because of job cuts or business closures. On the other hand, many will be able to get away because of money saved that they have been unable to spend in closed non-essential shops and services.

The severe national restrictions in Portugal are impacting on many businesses while aimed at getting high infection and death rates down so that it is safer to reopen those very businesses again for tourists as well as local citizens. How that strategy works remains to be seen.