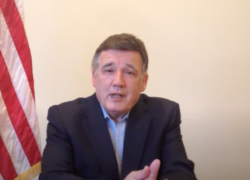 Senator Marc R. Pacheco (D-Taunton), Massachusetts,  announced that he will serve as chair of the newly created State Legislative Climate Alliance established by the Eastern Region of The Council of State Governments (CSG East).

The goal of the State Legislative Climate Alliance is to provide nonpartisan education, best practices, and innovative state policy solutions to help officials address the challenges posed by climate change. While housed in the North East, the alliance membership will be open to state legislators throughout all 50 U.S. states and U.S. territories.

“I am both honored and pleased to serve in this position,” stated Pacheco. “My leadership as founding chair and chair of the Senate Standing Committee on Global Warming and Climate Change has contributed to Massachusetts being a leader and pioneer in state-based efforts to reduce emissions and mitigating the effects of the climate crisis in the Commonwealth. I am eager to work with legislators throughout all 50 U.S. states and US territories in an effort to secure a clean energy future, there is no time to waist,” he added.

“I am pleased to have been reappointed as chair of State Administration and Regulatory Oversight – a committee responsible for providing systematic transparency throughout state government,” said Senator Pacheco.

“As someone who has sought to ensure procedural fairness and accountability throughout my legislative career, I am eager to continue that work. I look forward to working with my new House counterpart Representative Antonio Cabral in our committee’s efforts to establish an environment of openness and accessibility in administrative and regulatory matters,” Pacheco added.

Senator Pacheco has also been reappointed Vice Chair of the Joint Committee on Telecommunications, Utilities, and Energy (TUE). “I am pleased to have the opportunity to continue providing a voice and oversight for the ratepayers and consumers of the Commonwealth,” said Pacheco.

Senator Marc R. Pacheco (born October 29, 1952 in Taunton, Massachusetts), of Portuguese descent, is an American state legislator serving in the Massachusetts Senate. He represents the 1st Plymouth and Bristol district, which includes his hometown of Taunton and nearby towns. He is a Democrat who has served since 1993. From 1989 to 1992 he was a member of the Massachusetts House of Representatives. Prior to serving in the Massachusetts legislature, he was a member of the Taunton school committee (1980–89) and the Chief Assistant to the Mayor of Taunton (1982–88). Pacheco ran in the 9th congressional district special election held in 2001. He finished fourth in the Democratic primary, with 13% of the vote. Pacheco received an associate degree from the Stockbridge School of Agriculture at the University of Massachusetts Amherst, a bachelor’s degree from New Hampshire College (now Southern New Hampshire University), and a master’s degree from Suffolk University.