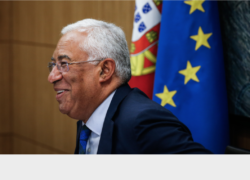 Prime Minister António Costa returned home today, from the European Union (EU) summit, with the promise of €45.1 billion ($52.5 billion) over the next seven years – which Portugal need not to pay back.

The deal was closed, early on Tuesday, after EU leaders reached an agreement following more than 90 hours of talks.

Pleased with the outcome, António Costa told the BBC, “While it’s true that it could have had a slightly bigger dimension, the recovery plan is robust enough to respond to the current estimates of the coronavirus crisis.”

The Portuguese southern region of Algarve will get a €300 million relieve package, targeted to compensate for the downfall in local tourism, while the autonomous regions of Madeira and Azores will see a boost of €35 million ($40.3 million) each.

The whole deal involves a total of €750 billion ($859billion) in loans and grants to mitigate the economic sock, caused by the COVIDE’19 pandemic, involving the EU 27-member countries.

An average capped €360 billion, in low-interest loans and grants, will be made available to the hardest hit member countries. Italy and Spain are expected to be the main recipients.

The loans and grants will be distributed during the next 10 years, up to the end of 2029.

Charles Michel, the summit chairman, stated that the deal was the “biggest joint borrowing ever agreed by the EU” describing it as a “pivotal moment for the EU bloc.

To meet the commitment, the European Commission will borrow the €750 billion on international markets, it was reported.

The United Kingdom, which left the EU in January and has been severely affected by the COVID’19, was excluded from the deal.

The package needs ratification by the European Parliament.

In the last 24 hours, six more people died of COVD’19 in Portugal, an additional 127 cases were confirmed (an increase of 0.2% over the previous day). According to the epidemiological bulletin of the Directorate-General for Health (DGS) of this Tuesday (July 21), in total, since the pandemic began, there have been 48,898 infected, 33,769 recovered (plus 222) and 1,697 coronavirus deaths in the country.

There are currently 13,432 active cases being monitored by health authorities. 101 less than this Monday.

This is the second day in a row that the number of new infections is below 150, after this indicator has remained in the 300s for a week. Since May 11, when 98 infections were first registered, that number has not been that low.

In the Azores, the Regional Health Authority reports that the 1,023 tests carried out in the last 24 hours did not reveal positive cases of COVID’19.

Currently, the Region has a total of 161 confirmed cases of infection, with 9 active positive cases, of which São Miguel (7), Terceira (1) and Flores (1).

Madeira, with 8 positive cases,  has not registered new active COVID’19 infections this Tuesday.  Madeira has confirmed a total of recorded 102 COVID’19 cases, of which 94 have recovered. No deaths were reported. A total of 10,592 people have been monitored by the health authorities in the region, of which 4,566 are under active surveillance

370shares
Share this ArticleLike this article? Email it to a friend!
Email sent!