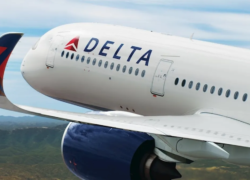 Delta Air Lines has resumed flights between New York-JFK and Lisbon, following the lifting of COVID’19 restrictions, on the entry of North Americans, by the Portuguese government.

The airline will operate four direct weekly flights between New York-JFK and Lisbon on Mondays, Tuesdays, Thursdays and Saturdays.

For the New York-Lisbon route, Delta Air Lines will partner with Air France, KLM and Virgin Atlantic. Under this partnership, customers can also reach Portugal via Delta’s European hubs in Amsterdam and Paris.

“Portugal has been one of Delta’s most popular destinations for leisure travellers and we are delighted to reopen this cherished route to American tourists, further supporting the economic recovery from the global pandemic,” said Amy Martin, general director of planning for Delta’s international network.

Delta Air Lines resumes a popular year-round route between Portugal and the United States, inaugurated on May 26, 2017. In 2018, Delta Air Lines started serving the Azores with a flight from New York-JFK to Ponta Delgada. The service was canceled in 2020.

Currently the Azores are served by its own airline, SATA International/Azores Airlines, offering six direct flights a from Boston (Massachusetts) (Monday through Sunday except on Saturday), and two flights a week (Wednesday and Saturday) from Toronto, (Canada). The Boston/Ponta Delgada route operates in partnership with Jetblue, so that Azores Airlines customers may reach other destinations within the US.

Traveling to Portugal will require a negative PCR or NAAT test or a negative antigen test, respectively within 72 hours or within 24 hours prior to travel. However, entry into the US for travelers from Portugal, or who have been in the Schengen area, in the 14 days prior to travel, remains restricted.

During the pre-pandemic period, the US was one of the fast-growing markets for tourism in Portugal, with visitors growing more than 20% in 2019 compared to the previous year, according to data from Turismo de Portugal.

For further information regarding traveling restrictions to Portugal and the Islands visit the US Embassy in Lisbon.

COVID’19: Vaccinations up, infections down, restrictions lifted – By Len Port