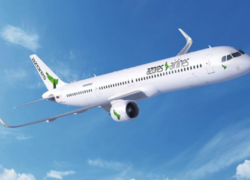 SATA Azores Airlines has announced it will cancel 10 flights between Toronto, Canada, and the islands of São Miguel and Terceira, in the Azores, in June and July, due to reduced demand.

In a press release, the Azorean air carrier has stated that although the majority of flights planned between the Azores and Canada will be maintained, starting as of June 24, eight flights will be canceled between Ponta Delgada and Toronto, Canada, in addition to two connections between Praia da Vitória, Terceira, and Toronto.

The connection between Frankfurt, Germany, and Ponta Delgada, São Miguel, will also be reduced, from two flight to one flight  a week, on Sundays.

Since the beginning of the Covid’19 pandemic, the airline “had no alternative but to permanently re-adjust the air operation,” due to “cancellation of reservations by travelers,” SATA Azores Airlines has stated.

The SATA group, which manages SATA Azores Airlines, expects to see an increase in the reservations for the month of August, if  “some restrictions are lifted” by the destinations.

In May, anticipating the Azores would become again “an attractive destination” in the summer, SATA Azores Airlines had indicated it could increase its flight capacity to a total of 53 thousand seats in the months of July and August.