Travel: SATA to increase flight capacity for the summer – Azores 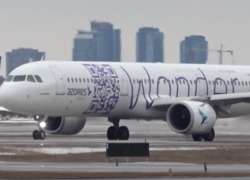 Anticipating the Azores will become again “an attractive destination” this summer, SATA Azores Airlines has indicated it may increase its flight capacity to a total of 53 thousand seats in the months of July and August.

Accordingly, SATA plans to offer more seats to international destinations, including more flight availability from the Azores to Boston (USA) and Toronto (Canada), while retaking some European destinations.

The tentative plan is subject to the evolution of the COVID’19 pandemic inside and outside the Azores, which remain a “controlled epidemiological” travel destination.

SATA will also offer an approximate 181 inter-island connections per week, up to about 24 thousand seats, while maintaining the traditional routes between Madeira and the Azores.

In a new development, SATA has just been cleared, by the European Commission, to receive a government grant worth over €267 million (US$320 million) as compensation for pandemic-related travel restrictions and losses.

SATA Group, the airline parent, “had been facing financial problems before the pandemic, with operating losses and negative equity, and the situation has been aggravated by the crisis,” the Commission said