COVID’19: Vaccinations up, infections down, restrictions lifted – By Len Port 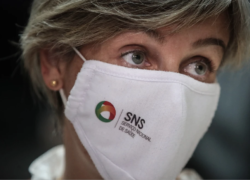 After a slow start, Portugal is now ahead of schedule in vaccinating its citizens against COVID’19.

“The goal of having 70% of the population of mainland Portugal vaccinated with at least one dose was reached today, before the initially planned date,” the Ministry of Health announced on Friday.

“About 12.1 million vaccines have been administered in mainland Portugal, which allowed more than 6.9 million people to be vaccinated with at least one dose, of which around 6.2 million already have the two doses,” the Ministry added.

Portugal’s total population is about 10.2 million. With 81,500 vaccinations administered each day last week, it will take just under a month to administer enough doses for another 10% of the population.

Meanwhile, COVID’19 infections are decreasing. The number of new infections on average each day is now said to be 2,331. That’s 18% of the peak at the end of January this year.

Since the pandemic began, a total of 982,364 infections and 17,440 COVID-related deaths have been recorded in this country.

The Reuters news agency points out that “there is no one perfect statistic to compare the outbreaks different countries have experienced during the pandemic.”

Looking at a variety of statistics you get a more complete view of the virus toll on each country, explains Reuters.

The chart in this website show several different statistics, each with its own strength and weakness that mark the various ways each country’s outbreak compares in its region and the world.

With Portugal’s vaccination rollout speeding up, the government recently introduced a three-stage plan to lift COVID’19 restrictions, including scrapping a night-time curfew and the lifting of restrictions on the opening hours of restaurants and shops.

Bars and clubs are staying open late into the night for the first time since March last year. But, as the BBC put it, “customers can only enjoy the revelry sitting down – dancing will be allowed in October if the vaccination campaign continues successfully.”

The Portuguese authorities still recommend working remotely, but this is no longer compulsory.

With the lessening of infections and restrictions have come an increase in visitors from abroad, including what some in the tourist trade describe as “an avalanche” at long last of holidaymakers from the United Kingdom.

There are now many German, French, Dutch and other European summer visitors, though it has all come far later than hoped for early in the year.

The last really good year for tourism in Portugal was 2019.  About 1.2 million visitors came from the UK alone. As the pandemic worsened, that figure was slashed in 2020 to just over 180 thousand.

This year the Algarve has experienced an increase of 40% in the national market, compared to July 2019, offset by a drop of 76% in the foreign market, according to AHETA, the Association of Hotels and Tourist Enterprises if the Algarve.

Since the beginning of the year, says AHETA, occupancy per room recorded an average decrease of 68.9 percent and sales volume a 68.6 percent decrease compared to the same period of 2019.

Tourism and all travel-related revenues account for about 10% of the country’s gross domestic product. Tourism is also a key source of employment.

313 shares
Share this ArticleLike this article? Email it to a friend!
Email sent!