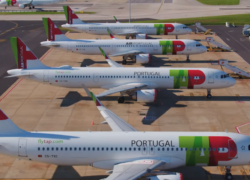 TAP Air Portugal has announced it will gradually restore, by August, flight operations to 879 flights per week on 100 routes worldwide, including the United States and Canada.

TAP will also operate 555 additional flights, each week to new European destinations, and 83 flights each week to the former Portuguese colonies in Africa, with six flights each week to Luanda, Angola; three to Maputo, Mozambique; three to Bissau, Guinea-Bissau; four to São Tomé, São Tomé and Príncipe; and 10 to Praia, three to Sal and seven to São Vicente, in Cape Verde.

Service to Madeira will also increase over the coming months, with TAP operating five daily flights from Lisbon to Funchal, as well as two daily flights between Porto and Funchal. Starting in June, TAP service to Porto Santo will increase to five flights per week.

By August, TAP will operate 22 weekly flights to the Azores, including 12 flights per week from Lisbon and three per week from Porto to Ponta Delgada and one flight each day from the Lisbon to Terceira.

TAP Air Portugal is now offering to all passengers a COVID-19 testing service at Lisbon Airport at a discounted in partnership with Cuidados Integrados de Saúde (UCS). Test results will be sent directly to your email, making the entire process as comfortable and simple as possible, within 30 minutes. The testing service can be scheduled directly on the UCS website.

TAP has also reiterated it “offers all the airline’s passengers more flexibility, allowing them to book and organize their travels with confidence.” All tickets booked by May 31, for travel by December 31, 2021, can be changed free of charge.

In February, TAP Air Portugal announced the suspension of 93% of its international operations, drastically reducing the North America routes, due to the new COVID’19 travel restrictions and a drop on demand.

For further information concerning traveling to Portugal from North America visit the US Embassy in in Portugal online.