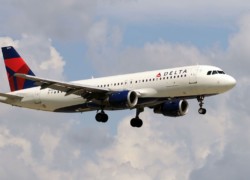 Delta Air Lines will stop flying to Ponta Delgada from New York next year, the president of the Azores Tourism Association Carlos Morais has confirmed.

In the same note, Delta Air Lines points out that “customers will be able to continue to fly between Portugal and the United States throughout the year from Lisbon to New York or through de summer service between Lisbon and Boston.” Delta apologizes “for any inconvenience this may cause our customers,” the note said.

Presently Delta is the only US airline that serves the Azores. Without Delta flights, the Azores will be served by its own airline, SATA International/Azores Airlines, that currently offers direct flights from Boston (Massachusetts), and Oakland, (California).

Delta Air Lines’ first operation to the Azores started on May 25, 2018, and included a seasonal five weekly flights, connecting Ponta Delgada, on São Miguel Island, to John F. Kennedy Airport, in New York. The summer operation, from May to September, used a Boeing 757-200ER with a capacity of 199 passengers.

The new flights complemented the airline’s daily existing flight between Lisbon and New York-JFK, which was launched in summer 2017 and resumed later as a year-round service. In total, the airline offered more than 7,400 seats each week between Portugal, the Azores and the US.

The Secretary of Tourism of the Government of the Azores, Marta Guerreiro, stressed that the Region did  “everything” to avoid Delta’s the decision.

For Marta Guerreiro, this “is not a problem of lack of investment” in the tourism promotion of the Azores, because there has been “increased interest in the destination.” she said.

Despite occupancy rates above 80%, Delta claims that the profitability is below the operations it has had and therefore decided to discontinue the service.