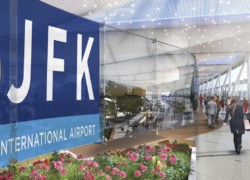 The Azores Airlines announced it is considering adding new destinations in the United States and Europe from its base in São Miguel, in the near future, including a route between New York and Ponta Delgada.

The initiative follows the announcement by Delta Airlines, in October, to suspend the route between New York and Ponta Delgada, which lasted about a year and a half,  between 2018 and 2019. Delta was the only US airline that served the Azores.

Delta Air Lines’ first operation in the Azores started on May 25, 2018, and included a seasonal five weekly flights, connecting Ponta Delgada, on São Miguel Island, to John F. Kennedy Airport, in New York.  Despite occupancy rates above 80%, Delta claimed that the profitability was below its operational rate.

In January, SATA Azores Airlines announced the signing of a codeshare agreement with Air France for a new route network starting at the Paris Charles de Gaulle airport with destinations to five islands in the Azores, namely São Miguel, Santa Maria, Terceira, Pico and Faial and vice versa.

In another development, TAP Air Portugal announced in November that it will offer two new nonstop routes from North America to include Boston/Ponta Delgada and Montreal/Lisbon. The new service will be launched in the summer of 2020.

Azores Airlines already operates direct flights between the Azores and the United States and Canada in addition to 25 destinations in seven countries in Africa and Europe.