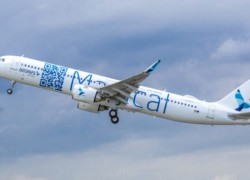 In a statement to the press, SATA Azores Airlines announced the Azores Airlines and Air France signed an agreement, effective today, to “increase the supply of air connections” and “new possibilities” “for customers of both airlines wishing to travel between the city of Paris and the Azores (and vice versa) via Lisbon or Porto.

Codeshare is an agreement in which two or more airlines share the same flight, sharing the travel codes, the same service standards and the same sales channels.

SATA Azores Airlines stated, “this agreement allows to offer a simplified booking and travel process, in which a single plane ticket is issued”, but passengers also enjoy the possibility of “checking in until their final destination, including for your luggage, without loss of benefits “with respect to” the baggage allowance or the accumulation of points in the respective frequent flyer programs .”

Regarding this agreement Boris Darceaux, director general of Air France-KLM for the Iberian Peninsula, stated: “We are very proud of this announcement, especially given our continued growth and consolidation in the Portuguese market in recent years. With this new code share agreement with SATA Azores Airlines, we will be able to offer Azorean customers quick access to our hub in Paris Charles de Gaulle and beyond, to our global network. Customers will also have the opportunity to discover the new Air France cabins, renovated lounges and innovative products and services.”

Azores Airlines is a subsidiary of SATA Air Azores, based in Ponta Delgada, São Miguel island, with about 25 destinations in seven countries in Africa, Europe and North America.