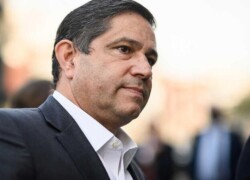 Portuguese entrepreneur Mário Ferreira will be the first Portuguese “space tourist,” to board the New Shepard capsule in its next space mission programed by  Blue Origin, the Jeff Bezos aerospace company.

Blue Origin has confirmed that Mário Ferreira would be the first person from Portugal to cross into the space frontier.

Jeff Bezos, the founder and executive chairman of Blue Origin, is the former president and CEO of Amazon.com.

Mário Ferreira has shown an interest in being a “space tourist” since he reportedly bought a ticket for a suborbital flight of Virgin Galactic owned by Richard Branson. The flight didn’t materialize due to delays in the development of the project.

Mário Ferreira is the president of the Pluris Investments, a business group that includes more than 40 companies involved in tourism, media, real estate, insurance and renewable energy. He also owns a position in Portuguese broadcaster TVI (Televisão Independente) and the Douro Azul cruise company.

Currently, the Portuguese pioneer in space is under investigation, accused and indicted of possible crimes of tax fraud and money laundering, according to the Tax and Customs Authority, in a corruption case related to the purchase and sale of the ship “Atlântida”.

Blue Origin hasn’t said how much its customers are paying to fly into space, but it has been reported that the fare is in the range of $1.25 million.

According to Blue Origin’s official website, the crew of the New Shepard 22nd flight, will also include the first Portuguese astronaut whose name was not yet revealed. The flight date has not been announced.

The announcement was made during the GLEX Summit 2022 which took place in Ponta Delgada, Azores, between July 4-7, co-sponsored by the Explorers Club of New York and the Portuguese company Expanding World, with the support of the Government of the Azores and Tourism of Portugal.

The first known eligible Portuguese astronaut is Ana Pires, 41, who has been granted the NASA’s Astronaut-Scientist Diploma. A former student at the Engineering School of the Porto Polytechnic Institute and researcher at Institute for Systems and Computer Engineering, Technology and Science (INESC TEC), she was awarded the diploma after successfully completing the Certification Course that was held in Embry-Riddle Aeronautical University, in Florida.

Blue Origin, is an American privately funded aerospace manufacturer and sub-orbital spaceflight services company headquartered in Kent, Washington, which mission is to envision a time when people can tap into the limitless resources of space, by developing reusable launch vehicles and in-space systems that are safe, low cost, and serve the needs of all civil, commercial, and defense customers.