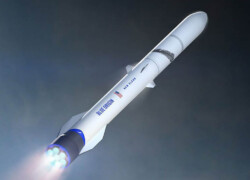 For the first time, a Portuguese astronaut will be part of a space expedition as a crew member of the next mission of Blue Origin, the Jeff Bezos aerospace company.

Jeff Bezos, the founder  and executive chairman of Blue Origin, is the former president and CEO of Amazon.com.

The announcement was made during the GLEX Summit 2022 which took place in Ponta Delgada, Azores, between July 4-7, co-sponsored by the Explorers Club of New York and the Portuguese company Expanding World, with the support of the Government of the Azores and Tourism of Portugal.

The Portuguese astronaut, whose identity was not yet revealed, will board the New Shepard spacecraft, on a date to be announced, after undergoing about 14 hours of training.

The Portuguese astronaut will be part of the crew of the sixth New Shepard next space mission. The spacecraft has been named after astronaut Alan Shepard (1923-1998) of the Mercury expedition, as a tribute to his legacy as the first American to reach space, on May 5, 1961.

Each special flight will last an average of about 11 minutes, taking astronauts above the Kármán line, at an altitude of 100 km, which is considered the frontier of space by international authorities.

The Kármán line is the altitude where space begins. It is 100 km (about 62 miles) high. It commonly represents the border between the Earth’s atmosphere and outer space.

In fact, the New Shepard project is a paid space tourism program which provides six available seats on a suborbital flight, about 11 minutes long,  which grants its crew members the status of astronauts.

Once they reach microgravity, astronauts are “weightless” in suborbital space for about three minutes.

The crew capsule is programmed to descend using a parachute, arriving at Earth a few minutes after the thruster. The structure of the New Shepard spacecraft is based on a reusable rocket and a capsule.

Organized by the Explorers Club of New York and Lisbon based Expanding World, the  GLEX Summit 2022 , under the motto “What’s Next?”, gathered more than 50 scientists and explorers from 14 countries.

The program was divided into four main themes: Oceans; Space exploration; Nature Conservation and Climate Change; and the current and future Great Expeditions of our time.

Blue Origin, is an American privately funded aerospace manufacturer and sub-orbital spaceflight services company headquartered in Kent, Washington, which mission is to envision a time when people can tap into the limitless resources of space, by developing reusable launch vehicles and in-space systems that are safe, low cost, and serve the needs of all civil, commercial, and defense customers. 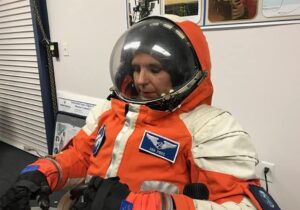 The first known eligible Portuguese astronaut is Ana Pires, 41, who was granted the NASA’s Astronaut-Scientist Diploma. A former student at the Engineering School of the Porto Polytechnic Institute and researcher at Institute for Systems and Computer Engineering, Technology and Science (INESC TEC), she was awarded the diploma after successfully completing the Certification Course that was held in Embry-Riddle Aeronautical University, in Florida.

The purpose of the course is to prepare candidates for a suborbital spaceflight as NASA Mission Specialist or Payload Specialist. The training comprised the simulation of a mission, with a space suit, flying in acrobatic airplanes to adapt to the G Force and hyperbaric chamber sessions to observe hypoxia impact.

Currently, 13 Portuguese aspiring astronauts have passed to the second phase of the astronaut selection process promoted by the European Space Agency (ESA), meaning they can still be selected to be part of the first group of European astronauts who might travel do the Moon. According to ESA, of the 13 Portuguese invited to the second stage of this concourse, ten are men and three are women. All of them have already taken the necessary tests to know if they will advance to the psychological tests of the second phase of the selection process. Initially, 320 Portuguese have submitted their application to become an ESA astronaut.