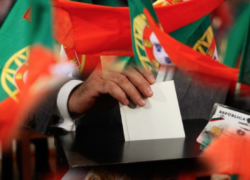 Judges of the Constitutional Court, unanimously, decided today to nullity all the votes of the Portuguese emigrants who cast their ballots in the electoral constituency of Europe for the general elections of January 30, 2022.

The court rule, which calls for new elections, was taken after over 157,000 votes, cast by Portuguese living in the electoral constituency of Europe, were arbitrarily annulled and castoff by the National Elections Commission (CNE) the national board of elections. The repetition of the botched election has been scheduled for March 12-13.

In accordance with the CNE reasoning, after votes received by post without identification were considered null, they were inadvertently mixed into the ballot box together with valid votes duly identified. Subsequently, because it was not possible to separate the valid votes from the invalid votes, the board of elections decided unilaterally and arbitrarily to annul and castoff all the votes in question, totaling 157,205.

The court rule, which has created a constitutional crisis, follows the most participated elections by the Portuguese community living abroad. The illegalities registered in the process will delay the constitution of the new Parliament and the establishment the new Government, scheduled for next week, be lead by incumbent Prime Minister  António Costa, including delaying until June the approval of the 2022 state budget.

In absolute numbers, the total number of Portuguese voters abroad went from 158,252 in 2019, to 257,791 in 2022, which represents an increase of 62%. According to data from the General Secretariat of the Ministry of Internal Administration (SGMAI), 1,521,947 Portuguese living abroad are registered to vote.

The actions by the board of elections reflect serious flaws in the constitutionality of the Portuguese electoral law, which has been ignoring calls for reform based on irregularities being reported in over 30 years. Most recently, in the 2019 legislative elections, 34,000 votes cast by Portuguese voters abroad were also annulled.

Unlawfully anomalies, which have been persistently ignored, include negligence and/or bureaucratic irregularities regarding the voting process, involving thousands of complaints by registered voters around the world who have claimed they have not received their respective ballots or have had their ballots returned to their addresses without justification, or have been not able to fulfill their right to vote in person.

PAJ/Staff/ This developing story will be updated

These bags are the perfect choice for your VEGAN lifestyle, as it’s made out of cork that’s extracted from the oak trees in an ORGANIC and SUSTAINABLE way.