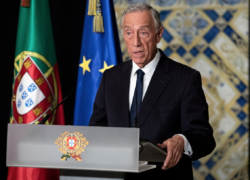 The President of Portugal, Marcelo Rebelo de Sousa, announced today that he has dissolved Parliament and called for general elections to be held on January 30, after a lawmaker’s majority rejected the government’s 2022 budget bill last week.

The rejection of the bill takes place after six years of a Socialist administration by Prime Minister António Costa.

“In moments like this there is always a solution in democracy, without drama or fears … to give the word back to the people,” President Marcelo Rebelo de Sousa said in a televised address.

According to the Portuguese Constitution, after the Office of the President issues a dissolution decree of Parliament, elections must be held within 60 days.

Before making his decision, Marcelo Rebelo de Sousa listened to the opinion of the Council of State, a consultative body formed by the nine parties with parliamentary representation and other political and social representatives.

At the Council of State meeting, former presidents as well as representatives appointed by Parliament and the Head of State, endorsed the dissolution of Parliament almost unanimously.

According to opinion polls, the majority opinion of the Portuguese agrees with the Council of State. Polls also show support for the Socialist Party with little changed from the 36% they won in the last national election in 2019, with the Social Democrat Party in second place with about 27%.

Polls also revealed that all left-wing parties, who vetoed the budget along with all right-wing parties, are in single digits and will lose seats. The Chega party, the newest far-right political formation, may emerge as the third-strongest party.

Portuguese citizens living abroad are allowed to vote by mail or in person in the January 30 general election, but have very few days to guarantee that they will be able to participate. Approximately there are one and a half million registered voters living outside Portugal.

According to the process, the Electoral Administration will be sending ballot papers to registered voters abroad, to the to their Citizen’s Card address.

However, because many addresses have changed or are outdated, many will not receive the ballot papers timely and will not be able to vote.

Requests for address changes must be made before November 10, 2021. Afterwards the addresses will not be updated.

According to the Electoral Administration, in 2019, more than 300,000 ballot papers sent abroad were returned.

The movement “Também somos Portugueses” (TSP) has alerted those living abroad, who wish to vote, to: (1) confirm where they are registered; (2) confirm their address is correct; (3) vote in person at a consulate.

While citizens living abroad, with an incorrect or wrong address, may be able to correct their address at: https://eportugal.gov.pt/servicos/alterar-a-morada-do-cartao-de-cidadao, those residing in Portugal can check if they are registered, and where, at Ministry of Internal Administration (MAI) at https://www.recenseamento.mai.gov.pt/

The movement “Também somos Portugueses“ (TSP), is a global movement that seeks to facilitate the voting process for Portuguese people abroad, with members in Portugal, France, Belgium, United Kingdom, Germany, Brazil and the United States.

**Report a correction or typo to editor@portuguese-american-journal.com. We are committed to upholding our journalistic standards, including accuracy. Carolina Matos/Editor. This is a developing story. Please check back for updates.