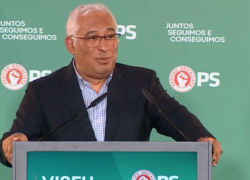 António Costa is serving as the current Prime Minister of Portugal since 26 November 2015.

The Socialist Party (PS) won 117 seats in the 230 seat parliament, up from 108 in the outgoing assembly. The main opposition center-right Social Democrats (PSD) won 71 seats. Accordingly, 226 of the 230 MPs are elected in geographic constituencies that correspond to the eighteen districts of Portugal and the autonomous regions of Azores and Madeira.

The newly formed far-right party Chega, won 12 seats, becoming the third largest party in the new parliament.  While the rise of Chega party has triggered concerns, the Communists and Left Bloc lost about half of their seats.

Abstention was estimated at 42%, down almost three points from the last election in 2019 despite pandemic restrictions.

In his victory speech, Prime Minister António Costa promised he would govern for everyone. “An absolute majority doesn’t mean absolute power. It doesn’t mean governing alone. It’s an increased responsibility.”

The general election was called in November 2021, by President Marcelo Rebelo de Sousa, after Prime Minister António Costa failed to pass a budget after a lawmaker’s majority rejected the government’s budget for 2022.

The Socialists’ victory means that Portugal is likely to have a stable government to lead the country out of the pandemic, and to administer a €16.6bn ($18.7bn) package of EU recovery funds.

Since country’s democratization in the 1970s, Portuguese politics has been home to a moderately multi-party system with two dominant parties. The center-left Socialist Party (PS) and center-right Social Democratic Party (PSD). These two parties have held between 75 and 90 percent of seats between them over the past 30 years.

Among the smaller parties there are populist Left Bloc (BE), the environmentalist People-Animals-Nature (PAN), libertarian Liberal Initiative (IL) and the far-right Chega.

The President’s executive powers are largely restricted to a ceremonial role, with limited presidential powers, such as appointing the Prime Minister and Council of Ministers, in which the President must be guided by the election results; dismissing the Prime Minister; dissolving Parliament to call early elections; vetoing legislation, which may be overridden by Parliament; and declaring a state of war or siege.

Over one million registered voters living outside Portugal were willing to vote by mail or in person in the January 30 general election. There are 9.3 million eligible voters in Portugal. An estimated five million Portuguese citizens live outside the country.

Recently, the Secretary of State for the Portuguese Communities, Berta Nunes, has announced the creation of a task force to develop the technical conditions to carry out an electronic voting pilot project for the decentralization of the voting process, which will include Portuguese citizens living abroad.

In the meantime, the movement “Também somos Portugueses“ (TSP), a global movement that seeks to facilitate the voting process for Portuguese people abroad, with members in Portugal, France, Belgium, United Kingdom, Germany, Brazil and the United States has proposed electoral voting reforms for all Portuguese, including those living abroad.