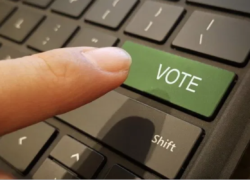 The Secretary of State for the Portuguese Communities, Berta Nunes, has announced the creation of a task force to develop the technical conditions to carry out an electronic voting pilot project for the decentralization of the voting process, which will include Portuguese citizens living abroad.

Nunes, who made the announcement in Parliament, has said that “a deliberation is now needed” by the Assembly of the Republic, after a change of the law as proposed by the Council of Portuguese Communities [Conselho das Comunidades Comunidades], namely article (44), following the next elections for the Council scheduled for the first half of November 2021.

If approved, Portuguese emigrants worldwide will be able to vote electronically in the 2023 legislative elections. A pilot test will be carried out as early as 2022 in a country to be designated.

If the test goes well, and “shows that it is possible, that it is reliable, and that people adhere and that there are no security issues,” it could be extended to be used in the next legislative elections, it was reported.

The project includes an extensive communication campaign, in order to capture the attention and interest of all Portuguese citizens worldwide who wish to participate.

Berta Nunes, who has placed electronic voting as one of her biggest commitments, has said that “Electoral participation needs all citizens to vote.”

According to the Secretary of State, the electronic vote “will always be a complement” to the vote in person. In her view, the main goal is to overcome the difficulties of access to voting venues, which guarantees “the trust, confidentiality and anonymity” of the electoral process.

The announcement follows the efforts by Portuguese advisers worldwide, who have recommended remote electronic voting as an “absolute priority” to solve “the low electoral participation” of Portuguese citizens living abroad.

Accordingly, Portuguese citizens in Brazil have drafted the “Letter from Brasilia” demanding electronic voting. Another pressure group designated “We are also Portuguese”, based in Europe, is a global movement that seeks electoral reforms, such as electronic voting, to facilitate the voting process. It includes members in Portugal, France, Belgium, United Kingdom, Germany, and the United States.

If electronic voting is approved by Portuguese law makers, Portugal will follow the steps taken by other countries that have already implemented universal electronic voting, such as is the case of Armenia, Australia, Canada, United States, Mexico, New Zealand, Panama and Switzerland.

In the presidential elections held in January this year, which reelected Marcelo Rebelo de Sousa, only 27,615 Portuguese citizens voted abroad, 1.87% of the total number of the 1,476,796 registered to vote.