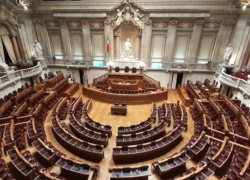 An “Open Letter” to the Portuguese Diaspora Around the World. An In-Person Audience with the President of the Republic Sought. The Next Government Must Reform the Electoral System – “No Voter Should be Denied their Constitutional Right of Suffrage. If No Reforms, The Matter Will be Taken to the European Court of Human Rights.”

I am a Luso-American with dual citizenship, and a registered voter, residing in the United States of America. Yesterday, January 30, 2022, I was prevented from casting a ballot in the so called “snap” Portuguese Legislative Election due to a governmental error. I never received my mail-in ballot.

Preliminary figures show the majority of the Portuguese electorate spoke – some 5.4 million of the 9.3 million registered voters – and gave the incumbent Prime Minster and Socialist Party (PS) Secretary General, António Costa, a majority – in the in-coming Parliament – Assembleia da República. The PS received just under 42% of the votes cast. As such, after six years in power, the “contraption” – “geringonça” – an alliance with the two major Left Parties – will not be necessary to govern in the in-coming Government. The PS now has a strong majority of Parliamentary seats – 116 + 1 or 2 more – when the final tallying of the vote is completed.

The other unexpected and pleasant result of yesterday’s election was decrease in the number of voter abstentions. According to the figures from the National Commission on Elections, at the General Secretary of the Ministry of the Internal Administration, which oversees the election, the abstention rate drop from 2019 – 51.4 % to 45.66%.

So, congratulations to all that voted and best of luck to the new government to be formed and its most – likely Prime Minister – António Costa. The President of the Republic (PR), Marcelo Rebelo de Sousa, will make that determination in the coming days. No doubt the White House – President Biden or Secretary of State Blinken – will issue a release shortly congratulating Portugal on the election outcome.

From a political perspective, PS had a most successful strategy and it paid great dividends. Unlike what we saw here in the United States in the Presidential Election of 2020, the result is not being contested and, thus, giving the new government the stability, it asked for. That’s terrific news for the nation.

Considering that it was just about 50 years ago – on April 25, 1974 – that the Portuguese people overthrew the repressive and fascist government of the dictator Oliveira Salazar and two years later – on April 2, 1976 – leaders of a free Government introduced and passed a progressive legislation creating today’s Portuguese Constitution – Constituição da República Portuguesa – which guarantees the right of suffrage, yesterday was an historic day for the peaceful transition of power, the continuity of government and democracy.

From a legislative and electoral perspective, Portugal’s democracy is still a budding flower – “cravo” – in dire need of fundamental reforms. I share the sentiments express by the President of the Republic, Marcelo Rebelo de Sousa, just two days ago during a “period of reflection” where he repeated the call for electoral reforms. The Government must address the current and persistent barriers – and there are a number – inherent in the current electoral process that prevents voters from exercising their constitutional rights.

Knowing of these persistent and systematic problems, it is regrettable that during an interview on CNN Portugal yesterday, the PM was asked to opine on the PR’s reform comments. The PM punted and said essentially that he had not thought about the matter. He’s been PM for the last six years! Equally discouraging, was the fact that in his victory speech that night he said nothing about electoral reforms. But then again, why would he? The system worked for him has it has for those in Portugal. Barriers to voting for us living abroad are nothing new. Neither is this new to past Portuguese Governments. For my part, I have shared countless examples of obstacles government leaders.

For example, in my case, in the Legislative Election of 2019, my first vote in a Portuguese election, my ballot was returned for the lack of paid postage by the Government. According to the Government’s tracking portal – eu Eleitor – the ballot for yesterday’s election was placed in the system on December 27, 2021, made it to Lisbon by January 2, 2022, but I have yet to received it here at home, in the Commonwealth of Virginia. In what turned out to be a futile attempt to seek assistance with the Portuguese Embassy here in Washington, DC, I visited the government facility only to find the doors shut. This on the eve of a major election in Portugal. To be fair, they did post a message regarding the elections on Friday, January 28, on its website. Didn’t help much. So, the PM’s comments were not only irresponsible but most regrettable as the Portuguese media was replete with other accounts of voters being unable to cast their ballots as well. The global movement and now registered organization – Também somos portugueses – also notified the government authorities of countless other voters with difficulties. But most astonishing was to hear the Secretary of the Communities – Berta Nunes – blame the voters who couldn’t vote as not understanding the voting process.

These issues could already have been addressed. Before the dissolution of the last government that brought about these snap elections, and over the past year and half that I have been asking the President of the Republic and the Provedora de Justiça to exercise their constitutional imperatives and convene a session of Parliament to address these matters. I had further asked them to also present these issues to the Constitutional Court for a ruling on the current electoral system. My plea fell on deaf ears. I and others – have repeatedly made the government aware of the need for electoral reforms. In an email yesterday, I formally asked for an audience with the President of the Republic in Lisbon – Belém – to discuss electoral reforms. The reforms are nothing new and very simple. Reform the electoral system to give the voters – for all elections – three voting options to choose from:

On a separate but still germane topic, a few words about proportional representation in the AR. Consider this astonishing figure from the Ministry of Foreign Affairs – Diplomatic Portal: “Portuguese communities around the world are one of the most important strategic assets of the Portuguese Foreign Policy and are the most significant display of a global Portugal. … There are more than 2 million Portuguese emigrants around the world today, and if we take into account the descendants of Portuguese emigrants, the population with Portuguese origins in hosting countries will be around 5 million – more than 40% of the population residing in the national territory – a diaspora that reached the five continents, which confirms the idea of the global Portuguese community as a very important strategic international asset.”

If true – I most certainly concur – Mr. President, Mr. Prime Minister, Mr. Foreign Affairs Minister, Madam Provedora de Justiça, elected deputies – I most respectfully ask – how can Portugal justify having a mere four (4) deputies – two (2) representing the Electoral Circle of Europe and another two (2) representing the Electoral Circle Outside of Europe in a chamber of 230 deputies – when the Portuguese daughters and sons living abroad represent 40% of the population? Math is not my forte, but I did some quick and “back-of-the-envelope math.” Using figures from the MAI site, from the last Presidential Election (PR’21), in that election the combined number of registered voters in Portugal was roughly 10,864,327, with 230 deputies in the last AR. Simple division tells me that each deputy represents 47,236 voters. But if we continue this logic and do the same computation for the Electoral Circles for Europe and Outside of Europe, we find the following absurdities:

The total number of voters for the Electoral Circle of Europe is 931,776. The total number of deputies is 2. If we apply simple division, this means that each deputy represents 465,888 constituents. As such, these 2 deputies representing Europe have constituencies that are 9.8 times greater than their counterparts overall. Here’s the math: 465,888¸47,236 = 9.86. Bottomline, the Electoral Circle for Europe would require another 9 – 10 deputies for there to be representational parity with the other deputies.

Similarly, the total number of voters for the Electoral Circle Out of Europe is 617,604. The total number of deputies is 2. If we apply simple division, this means that each deputy represents 308,802 constituents. As such, these 2 deputies representing this electoral circle have constituencies that are 6.5 times greater than their counterparts overall. Again, here’s the math: 308,802 ¸ 47,236 = 6.53. Bottomline, this Electoral Circle would require another 6 – 7 deputies for there to be representation parity with the other deputies.

In sum, if the Portuguese voters are to be represented proportionally – fairly – I the AR, the national legislative body would have to add another 15 to 17 new deputies. This would raise the total number of deputies to 245 to 247 members. Incidentally, and this is a topic for another day, I’m not certain just yet how this increase in legislators would affect the partisan political representation in the AR. I suspect that the current PS majority might would have increased to an unprecedented uber majority. But I’m speculating.

But this is clear to me, the Government’s current failure to act – instituting the needed reforms – expanding and refining voting options – and increasing the number of deputies – creates a discriminatory – and therefore unconstitutional – two-class electoral system that is as unacceptable as it reprehensible. I have said it before and will say it gain, Portugal’s (including the Açores and Madeira) current electoral system is impractical, injurious, unfair, discriminatory, and unconstitutional more so for Portuguese citizens living abroad. In short, what we have is an abridgement of constitutional rights.

The system must be simplified and modernized to allow for all – ALL – registered voters to be unimpeded in exercising their civic duty – which incidentally is also guaranteed under the European Union Constitution – so that no voter wishing to express her or his will is prevented from doing so freely in future elections.

I have asked the Portuguese Government to act. Electoral reforms must be demanded of the next Government. Mr. President, you have that power.

Should I not get a response, the next option is to submit an application to the European Court on Human Rights to address the inequalities inherent in the current Portuguese electoral system, which represents a violation of the political rights enshrined in the Convention for the Protection of Human

Rights and Fundamental Freedoms, or as it is commonly known – the European Convention on Human Rights. I eagerly await a response from the Government.

Yes, yesterday’s elections were a success for some – regrettably – not all of us Portuguese voters. That’s unconstitutional. It raises sobering questions of legitimacy. The status quo must change.