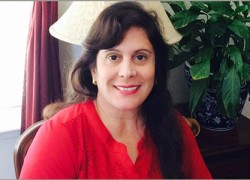 A Portuguese-American writer, author Margie Vieira was born in Northern California and grew up on a dairy farm. Her family has roots in Terceira, Azores, from where her parents immigrated to California in the 1960’s. Ms. Vieira is happily married to who she claims is “a most patient man.” Together, they have three grown daughters.

Her young adult book Seeing Again: Through the Eyes of a Child (2013) is about how clairvoyance allows us to see things we cannot see with our eyes. Her second novel A Hidden Puzzle (2016) also deals with the paranormal. Prior to writing these books, Vieira believed that all life had to offer was what she saw right in front of her, but her writing has greatly expanded her view of the world in new and different ways.

In this interview for the Portuguese American Journal, Margie Vieira speaks of her Portuguese-American upbringing in California and how that experience has influenced her writing and was passed down to her own three daughters. This interview was edited for length and clarity.

Millicent Borges Accardi: — Your books deal with the paranormal. What sparked your interest in that subject?

Margie Vieira: — I have been a fan of the mystery of life ever since I can recall. I love the biblical stories of Jesus and Our Holy Mother, and being born on Dec. 25th, has made me feel closer to what exists but is not seen by the human eye, but felt in one’s heart. One T.V. show that I enjoyed watching was The Ghost Whisperer.

Have you seen a ghost?
I am a firm believer in Our Holy Mother, and yes I have seen a few occurrences that others might say, my mind played tricks on me.

What’s your favorite paranormal movie?
Ha! Ghost, what else? Patrick Swayze and Demi Moore were fantastic. Also, a Spanish movie titled The Orphanage, a fantastic film to watch. It is sad, but with an exceptional closure to the story line.

Halloween is around the corner. Any suggestions for other paranormal books PAJ readers might enjoy?
One book I recently read, Between Will & Surrender by Margaret Duarte, has a beautiful paranormal story line. And it is a Northern California Book Award Winner.

What was the hardest thing to do when you decided to write a book? 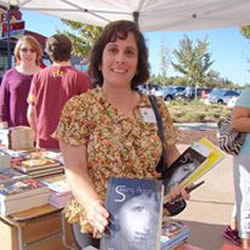 The author in a book-signing event in Great Valley, California.

The hardest hurdle for me was Acceptance. I could not see myself as a writer or an author. I kept telling myself you are JUST a Portuguese-farm girl. I ignored the feeling for nearly two weeks, but a push, an inner persistent nagging feeling kept hounding me to write Seeing Again. Until I gave into the incessant pull, the nervousness did not dissipate. After I started writing, I felt calm.

You were raised in a Portuguese neighborhood, on a dairy farm, can you describe what that was like?

Every day on the dairy was an adventure. As a child, I loved getting up early to go with my father and feed the calves. I still remember how they suckled on my hands. It was a gooey, sticky business but fun. I recall my grandfather and father having the milk cows out in the pasture grazing on the alfalfa, until they decided it would be more productive to grow the alfalfa and bail it into hay. Fresh milk was the best!

Avó Cotta (grandmother) would make cheese from the milk; also fresh goat cheese was available from the two to three goats Avô Cotta, (grandfather) raised. There were fresh eggs every day and what Portuguese dairy did not have pigs?

In November, there was always a “matança”. Friends from the bay area would arrive and stay the three days, camping out in sleeping bags in the living room. Two big vats were prepped for torresmos. Sarapatel and morcela were part of the menu. The Portuguese priest was invited and he would say a blessing over the whole event. It was a gathering of family and friends holding true to their heritage.

Did you attend Portuguese community events as a child? 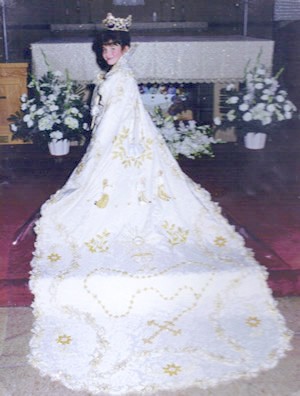 Ever since I can remember, my family attended the Holy Ghost Festas and the Festas of Our Lady of Fátima. A Festa do Espírito Santo e da Nossa Senhora de Fátima.

At the age of five, I was invited to serve as a side-maid for the Festa do Espírito Santo in Elk Grove, California, again at the age of seventeen I was honored by being the queen of the festa, in 1987. I felt proud holding the Holy Spirit Crown and representing a religious festa, knowing that many valued the Portuguese heritage and I was part of this custom. The parades were tiring, pulling a cape behind me but also exuberating. The masses were a reprieve from the heat and rewarding. Seeing so many queens and side-maids from other cities set a pride in my heart that I was part of a very special community.

The best moment was when we sat to eat sopas do Espírito Santo. Meat and cabbage was served with French bread dipped in the meat sauce. Oh, and we must not forget the fresh Massa Sovada . Fresh Portuguese sweet bread. Later, once I was married my two oldest daughters also were side-maids and queens for the Holy Spirit Festa and for the Festa da Nossa Senhora de Fátima in Thorton, California. We served on the Thorton committee and helped many years.

When did your family move to the US?

My mother and grandparents immigrated to California in 1960. My mother was allowed to go to school for a few years but then my father who had never forgotten my mother back in the old country, Terceira, Azores, came to ask her hand in marriage in July of 1964. At that time, my mother, who was a junior in high school, was not allowed to finish and receive her diploma. A very old fashioned belief that once she was engaged she was to marry.

However, my mother, Margarida Olivete Ferreira, became the accountant for the family’s dairy business and together with my father and maternal grandparents established a family legacy with very little schooling. The Portuguese have always been strong and work diligently to achieve their desired goals. I and my two siblings were born in California. Portuguese was my first language. I recall going to summer school in first grade to advance my English and the teacher sat me between two Hispanic children. When I went home that afternoon, my mother said, “How is it that I sent you to summer school to improve on your English and you come home speaking Spanish?” That thought always makes me smile. 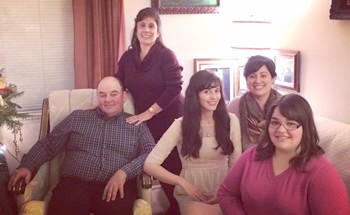 Margie Vieira (standing) with her husband and three daughters.

You have three daughters. What Portuguese traditions/food have you shared with them?

Can you tell us about your background, have you always wanted to write?

As a child, I remember standing near my mother’s office desk attempting to write what she wrote on a piece of paper and copying her handwriting. Reading is second nature to me. I have loved the smell, touch and look of books ever since I can remember holding one in my hand. I am an adamant reader. Mostly of young adult [books].

What interests you in the paranormal?

The significance of paranormal to me is far beyond ghosts and witches as readers have asked before, “Does your story revolve around ghosts?” No, Seeing Again is tapping into every human’s true conscience. The life force that we were born with.

My paranormal stories deal with our human essence, the spiritual aspect that lives within every human and the ability to connect with a higher energy, love- God. My second novel A Hidden Puzzle is an extension of the paranormal also; however, it is more complex with characters having to face their reality and not running from their life’s trials.

Why did you select a child as the narrator?

In Seeing Again, the story is narrated by Amanda Costa-Standford, Sam Standford’s grandmother. She is Portuguese married to an Englishman. Later in the story, the reader is introduced to Sam’s and Caroline’s perspective.

In A Hidden Puzzle, the story begins with Caroline speaking to her daughter. Then it changes to Mary, narrated in first person. I hope to write my fourth novel in third person. I feel closer to the characters in first person. That may seem strange but I find for the paranormal it’s a must in first person, for me.

How would you describe the plot of Seeing Again. in a few sentences, if you were in an elevator with someone? This is called “the elevator pitch”.

Amanda Standford races against life’s ticking clock to reveal to her clairvoyant grandson that he is not evil, life is worth living and all obstacles in life happen for a reason.

What writer inspires you and why?

A few of my favorite, reads are the Winter Sea, by Susanna Kearsley , The Power of One, by Bryce Courtney and I must not forget, Look Me In the Eye, by John E. Robison. My love of story, does not allow me to have really one favorite. Working with children at the elementary level has opened many doors to reading for me.

Is there a motto you live by?

Be yourself, and others will see you for who you are.

Do you have family in Portugal?

My father’s brother lives on the island Terceira, Acores with my only four first cousins. My husband’s family also lives there along with many second cousins and tios-avós. I have visited Terceira multiple times and have been to Lisbon twice.

What do you miss about Portugal?

I love the history, the cobble stone streets, the dynamics of the people living there and how life moves to a different song than the one here in the United States. On the island almost all year round there is a festival going on. Winter there is the Christmas lights, and Carnaval. In the Spring , come the Festas do Espírito Santo and the bullfights on the streets and in the arenas. Summer the bullfights continue and the San Joaninas and the Festa da Praia. In October it begins to slow down but intermittently there is always something the people on the Island celebrate. They live life.

In Sept., I was at the Linden Library, and the Great Valley Book Fest, in Manteca, CA. In October I will be at a Career Faire at the Linden High School to talk about the author’s profession. I hope I may have more author presentations in the near future. I love speaking and meeting other readers who hold the same passion as I do in reading and writing.

Was there something you would like to discuss that I did not cover in this interview?

Working with children has been my guide to writing. Their simplicity and seeing life as they do fascinates me and I ask, why as an adult, we forget the simplistic childlike moments in our lives. 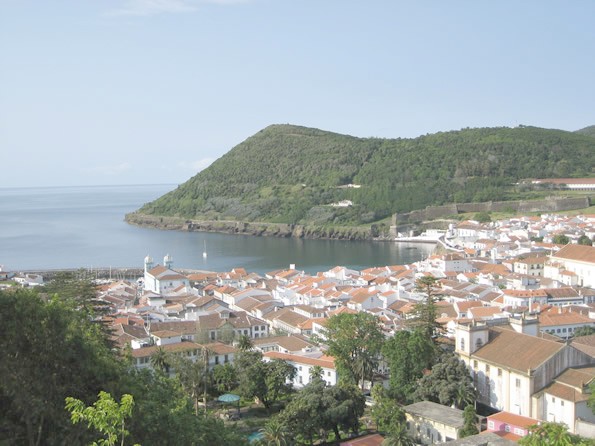 (*) Millicent Borges Accardi is a contributor to the Portuguese American Journal. She is a Portuguese-American poet, the author of three books: Injuring Eternity, Woman on a Shaky Bridge (chapbook), Practical Love Poems and Only More So (available now). She has received fellowships from CantoMundo, the National Endowment for the Arts, Fundação Luso-Americana (FLAD) and California Arts Council. Recently, she taught poetry at The Muse Writers Center in Norfolk; University of Texas, Austin; The Gathering at Keystone College; Nimrod Conference in Tulsa, and the Mass.Poetry Festival. Millicent lives in Topanga, CA. Follow her on Twitter @TopangaHippie