Ahmed Al-Sheikh: His Portuguese heritage and a unique perspective on things – Interview 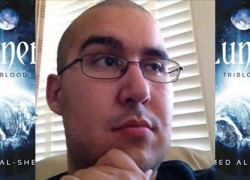 Born in 1982, in Riyadh, the capital of the Kingdom of Saudi Arabia, to an Arab father and a Portuguese mother born on Corvo island, Azores, author Ahmed Al-Sheikh has been a lifelong literature fan, always finding himself drawn to the fantasy genre. He is influenced by sci-fi writers such as Neil Gaiman, Robert E. Howard, and countless others.

His first book, Lunen: Triblood, is a science fiction, fantasy novel mixing humor, action, and introspection. It explores themes of personal growth against good versus evil.

When not writing, Ahmed works as a freelance writer reviewing films, video games, and entertainment news. He is also a longtime student of martial arts, who works toward advancing his skills regularly.

Currently, Ahmed calls Northern California home, but he has lived in the Middle East and England. His books, Wandering Djinn (Kindle only) and Lunen: Tribloood are available at Amazon and Barnes and Noble and online. 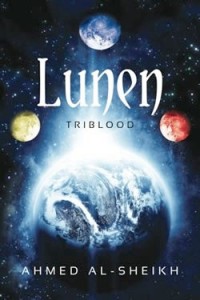 I’m half-Portuguese on my mother’s side. She and her family immigrated to the U.S. from Corvo, the smallest of the Azores. This means that every time I connect with my mom’s side of the family, I get a nice dose of Portuguese in my life.

Are you active in the Portuguese American community?
I attend the Dia de Portugal in San Jose every year. And as a child, during the summers, I’d often go to the festas, and last year I finally got to see a Portuguese bullfight. And there are a few times I’ve brought non-Portuguese friends along to these things.

You are Arab (on your father’s side) and Portuguese (on your mother’s side). How do the two sides meet? Are there similarities? Differences?

There are of course differences, but the similarities are often the most striking. There’s a large emphasis on both sides towards family and community, that feeling that your connections to your fellows makes you all the better. Also, there’s something to be said that two cultures so far apart both have a huge love for lamb-based dishes. And, in me at least, they do meet in a way that allows for a unique perspective on things.

I previously interviewed the sci-fi novelist Larry Correia, who is also of Portuguese heritage In every novel, he features a Portuguese character (as homage to his heritage). Have you ever considered this?

Not really, and that’s mainly because I’m so busy writing about worlds and locations that don’t really exist. I do try to include scenes, characters and places that can remind people of real-world equivalents, but nothing so blatant that people suddenly stop and ask how that could exist in this completely fictional setting.

What attracts you to sci-fi?

What attracts any of us to the genres we choose to write in? It’s usually a combination of a significant influence that introduced us to it, and the sometimes-limitless possibilities in the kind of story we can tell.

Keep in mind that I enjoy a good mystery or horror story as much as the next guy. But there’s something about how with sci-fi I don’t have to limit my imagination that just makes it click for me. Throw in how easy it can be to mix sci-fi with other genres and the sky’s the limit.

How has being self-published contributed to your success?

While commercial success can at times be an issue, I love having absolute control over my work and how it’s marketed and released.
And the indie author community is one of the most supportive you’ll ever find in this line of work. And when it seems like maybe you shouldn’t have gone this route, I just look at the reviews and see all the people who liked the crazy stories I tell, and that makes it all worthwhile. 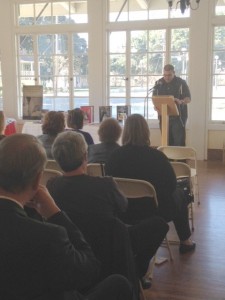 You read in the Kale Soup for the Soul reading in San Jose a couple of years ago and the audience loved your work. How was it for you to participate?

It was an absolute joy. Not just because I sold out every copy I had brought with me, but also because writers rarely get to see the people who enjoy their stories. We often get that information second-hand, through reviews and the like. But seeing all those people, of different ages and walks of life react so strongly to my little sci-fi tale, was one of the best moments in my writing career.

Can you describe a strong memory of a Portuguese event you attended?

Besides the Kale Soup reading? I guess the best one I can think of would be when I was selling my books at Dia de Portugal a year ago. I didn’t sell as many as I’d like, but sitting there with my work, selling a few copies, just felt so nice and pleasant.

What about being Portuguese-American informs your writing?

I honestly couldn’t tell you. I’m a Saudi-Portuguese-American who lived in London for a number of years, travelled to so many places like Canada and Japan, and experienced so many things. And all of that, the sum total of my being, comes out in my writing. I no longer try to see what parts of me inform my writing or ideas. I leave that for the readers to discover.

What was your first job and how (if it did?) did it foretell or shape your future?

When I was in high school, I did volunteer work at a Middle Eastern culture center, and even before then I was planning to be a writer. My imagination and ambitions were always clear to me from an early age.

What’s your favorite food? Drink? Ever write about Portuguese food?

I love all kinds of dishes, ranging from as regular as pizza to as exotic as sushi. As for drinks, I never touch anything stronger than a soda or juice. As for writing about food, I never really do. I might mention someone is eating some random little thing, but I never dwell on it. And when I do talk about food in my writing, I’m often using the sci-fi setting to make up some impossible meals that have no real world equivalent.

Can you share a memorable line or passage from one of your books? So our readers can be introduced to your work?

To slightly paraphrase from my first full-length novel Lunen: Triblood, “What do you like to be called?” It’s one of my favorite lines that I’ve written, and just simply says how I think we as people define ourselves, and shouldn’t let others do it for us.

Do you read any other Portuguese-American writers? Like Katherine Vaz or Frank Gaspar? Darrell Kastin?

Not yet, but I probably will. A good writer is also an active reader.

What’s your latest book and what is it about?

As of this moment, my most recent completed work available to the public would be Lunen: Triblood. It’s about a young woman named Winnie who finds herself inexplicably transported to a strange world with three moons.

While there, she becomes friends with a Triblood named Lunen. And without giving much away, the adventure and action ramps up as she has to learn the new ways this strange world works.

What do you think writers can do to enhance communication in the global world?

Mostly, just be true to yourself, represent the best parts of where you came from, and use your words to introduce strangers to your mind and experiences. After all, that’s all writers really do: use text to plant our minds in yours.

What project are you working on now?

I’m currently writing the second of the Lunen series, and it’s shaping up to be even bigger and crazier than the first.

While I don’t have any readings, I am working on getting myself into more international conventions. First hopeful stop will probably be Dubai for the Middle Eastern Film and Comic Convention.

Was there something you would like to discuss that I did not mention?

Only this message to aspiring writers out there. If you really love what you do, then remember that there’s always a way to get your work out there. You can submit to various literary magazines, or post things on a blog. You can go the traditional route of finding an agent or publisher, or go the indie route and put it out there yourself. Just remember that, like all art forms, the more you do, the more you’ll improve.

When someone gives you a dagger to cut yourself free, it doesn’t mean “Stand still and see what happens,” you idiot!” he yelled at her.

They had stopped running and taken shelter inside a small cave. Winifred had watched as her rescuer pulled the spearhead from his abdomen and then refused to bandage it. He simply covered it with his hand, took several deep breaths, and then began to yell at her.

“Listen, I’m grateful and all, but I’m a little freaked out by this whole thing!” she yelled back.

He gave her an appraising look before he smiled. “Fine. I’m sorry I yelled at you. I am angrier at myself for getting stabbed.” He sighed. “Leave it to an idiot like me to look away during a fight.”

“Well, I may be no expert on fighting,” Winifred said with a slight smile, “but you did pretty good back there.”

“Thanks. What do you like to be called?” he asked, taking a moment to glance below his hand at the state of the wound.

“Well, my name is Winifred Winters,” she replied. She sighed. “My father calls me Winifred, and a lot of people call me Fred, and my roommate Jennifer calls me Win, but that doesn’t really…” She stopped herself, realizing she’d been rambling.

“I didn’t ask what people call you,” the stranger said before standing up. “I asked what you like to be called.”

She stared at him, dumbstruck—not because he chose to stand despite the gaping wound in his stomach that his hand somehow managed to cover but because he had actually asked her what she liked to be called.

“Well, Winnie, it is a pleasure to meet you,” he said, offering his hand to shake. “Oh, sorry. This was the one covered in blood.”

“Oh my God!” she screamed. Blood still stained his tunic and a portion of his pants, and he still had blood on his stomach, but the wound had completely vanished. Not even a scar remained. “How did you do that? No one can heal like that!”

“My mother was a full Gold-mooner,” he answered. When he saw the confused look in her eyes, he looked her up and down as if he was starting to see her for the first time. “I’m a Triblood. Does that not scare you?”

“Thought so.” He sat next to her. “While I would love to explain this now, the sun is starting to rise. We should move.” He took the dagger from her hand at last and then kissed the hilt before sheathing it. “For now, let’s just say that I’m very strong, very fast, and heal very quickly.”

“And that gust of wind from last night?” she asked, standing up at last.

“Oh, that was nothing,” he said with a slight smirk in his voice as he led her out.