Originally a bakery, the café was expanded in 2010 to a full service restaurant offering breakfast, lunch and dinner. Marques’ bistro-style dishes, inspired by Portuguese tradition, are a lovely blend between the old and the new. Named after “Natas” its signature pastry – the place quickly became the talk of the Portuguese community and a neighborhood gathering favorite.

Located on Ventura Boulevard, in the Sherman Oaks area of the Los Angeles Basin the Marques’ café  – ‘Natas Pastries’ – is a breath of fresh air. Its charming blue and white glazed tiles transport diners to magical Portugal.  At night, tables are softly-lit by candlelight, reflecting on decorative mirrors and crystal chandeliers. On the esplanade, tables offer alfresco dining under bright umbrellas. 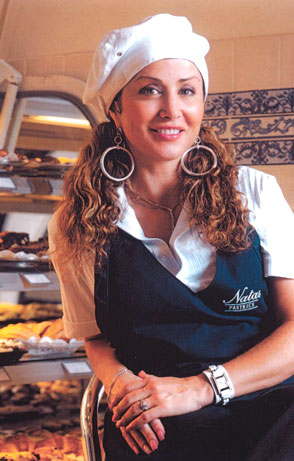 Breakfast items include traditional Portuguese favorites such as Bica and French toast on Portuguese sweet bread. Lunch includes Caldo Verde, and Delícias do Mar, (seafood salad with baby shrimp). For dinner, there is Chouriço sausage, flambéed at the table (on a traditional pig-shaped ceramic brazier) and Bacalhau. The restaurant is known for its imaginative variety Portuguese style tapas called “Petiscos.”

With creativity and innovation, chef Marques creates classic food, faithful to her heritage. She says her dishes “live in perfect harmony” and that she is thrilled to showcase Portuguese food “one of the oldest and most diverse cuisines of the world.”

Active in the community, Natas supports a variety of charities, local schools and Portuguese organizations, including the Divino Espírito Santo (DES) Portuguese Hall in Artesia, founded in 1927 to promote Portuguese traditions.

In this conversation with Portuguese American Journal contributor, Millicent Accardi, Chef Fátima Marques speaks of how she created Natas Pastries café and turned it into a local favorite.

What was your first job?

Picking grapes in France, at a Chateau, when I was on vacation from high school. It was hard work but lot’s a fun and it gave me an insight of other countries culinary treats and specialties that opened my palate.

When did you immigrate to the US?

All my family is in Portugal, I was the only one that came out here, pretty bold and scary but I had a dream and so I did. I came here in 1989 from London where I was studying dance. I came here to perfect the style of dance I was passionate about – jazz and hip-hop – popular in the US and then [my plans were] to return to Portugal to open my own dance studio.

I began working while I was here, performing in several dance videos, shows and later became involved in a singing group, The Skeme, where I was a singer and dancer.  After years of doing several facets of dance and music, went to music school and became a music engineer but I decided soon that I was not happy doing that. I still love to dance and I still go to classes for fun and music is still very much in my heart.

Natas was something I decided to do because it was a unique idea and something that I knew I could do. I always loved to cook and entertain and be creative in the kitchen, so I felt a strong passion there.

Where did get your training?

I am not trained as a professional Chef, I did not go to any culinary school to learn what I know, everything I know I learned from either my Mom or from my hands on learning experiences.

There are Portuguese restaurants in the San Francisco Bay Area and San Diego, and even a “Little Portugal” in San Jose, but, your restaurant is the only one in the Los Angeles area. What made you decide to open a restaurant here?

I opened Natas Pastries as a bakery only in 2005, but we expanded to a restaurant in 2010 because of the great amount of requests we got.

Your menu has traditional and non-traditional dishes, what entrees are the most typically Portuguese?

All the dishes are very traditional, including bacalhau, polvo à lagareiro and feijoada.

You serve breakfast, lunch and dinner, which is amazing! How do you manage?

We have morphed since we have opened but, because we have in the sense two businesses, bakery and restaurant; it works in our interest to be open long hours.

How did you develop your version of Pastéis de Nata? 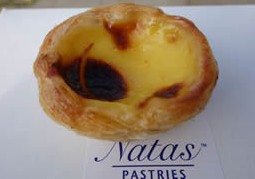 It is a traditional recipe that was originally created by nuns back in the 17th century, in Lisbon, Portugal. I personally learned it by doing an internship at a bakery near Coimbra, before I opened my business. I wanted to do something that was original and did not exist in LA, so I went home and learned how to bake Natas, popular in so many parts of the world but unknown to LA.

Did you go to cultural gatherings as a child?

I attended many festas, especially because my extended family lived in the country and we visited often. I have great memories of these events, the dancing, the food, the fireworks and the people.

I like seafood, so it varies but a good meal would have a grilled shrimp with a sauce to dip and oven baked potato, maybe with grilled chouriço and a side of mixed greens.

Can you describe a recent restaurant special?

Is there a recipe you can share with PAJ readers? 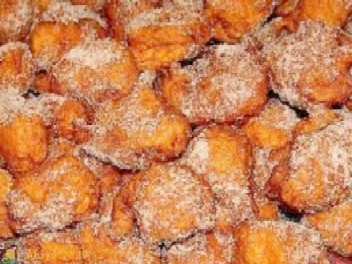 Cook the banana squash in water until is well cooked. Drain the water and take out the peel of the squash and disregard. Mash the pulp of the squash mixing it with the juice of the two oranges. Separately mix the yeast with a pinch of salt dissolving it in a little warm water (about 2 spoons) adding this to the flour. Mix all ingredients together well (about 15 minutes) together with the shot of your preferred liquor. After it is mixed well cover the recipient with a cloth and let it rest until it doubles its volume. Heat oil in a deep fryer to fry the fritters. When oil is ready take large spoon of the mix and fry. Make sure to keep tuning the fritters so they fry evenly. When they turn a golden brown take out of the fryer and cover with sugar and cinnamon. Note: You can also make this recipe using pumpkin.

Those of us who live frugally, appreciate your $10 daily specials. What inspired you to create such an affordable menu?

I wanted to offer something that everyone could afford and have a chance to come and dine in a beautiful environment, a reason to keep coming back, a place to meet. We offer a different menu for each day of the week. This week on Monday we offer Beef Stroganoff; on Tuesday there is Fricassé de Frango; on Wednesday we have Spaghetti à Portuguesa; on Thursday we  offer Carne Estufada; on Friday there is Frango Assado and on Saturday and Sunday we offer Prego no Pão.

Who are your customers?

We have a variety of clientele, from many locals to people that drive from far to come and visit; people that hear about us through word of mouth or the Internet.

Who’s been your favorite customer?

It’s hard to say. . .I have had customers that almost brought me to tears because they were so happy to find me and feast on something they missed from back home growing up, or a surprise elated face when someone bites on a Nata for the first time that just came out of the oven.

It’s all special, makes me very proud of those moments. Of course I am also proud to have so many celebrities as our customers that continue visiting us regularly. But one of my proudest moments was when Mom came to visit and said the food tasted just like home, now that warmed my heart. 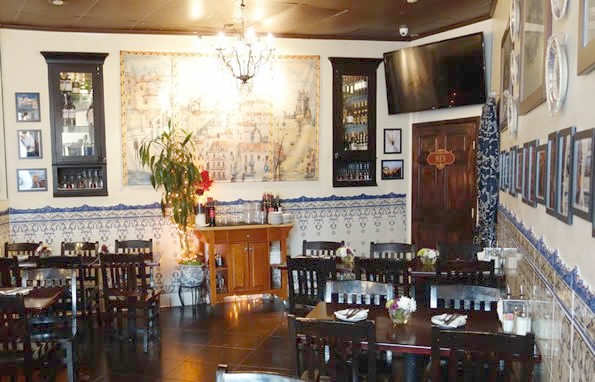