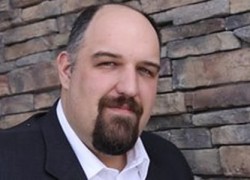 A former accountant, gun store owner, and firearms instructor turned blockbuster novelist, Portuguese-American author Larry Correia is perhaps one of the most fascinating writers in the fantasy/sci fi genre.

Born in Central California to a Portuguese dairy farmer, Correia spent his early years on the family farm in El Nido, then, the family relocated to Utah after they lost the farm. Later, Correia attended college in Utah, converted from Catholic to Mormon, got married, had a family and embarked on a quiet career as an accountant.

However, this was not to be. Correia took many detours after accounting: he was a gun store owner, government consultant and firearms instructor. However, always an avid reader, a few years ago, in his spare time, he wrote and self-published his first book, Monster Hunter International, earning him a spot on the Entertainment Weekly best seller list in 2008.

Best known for his serial books: Monster Hunter, Grimnoir Chronicles and Dead Six, Correia has also maintained strong ties to his Portuguese roots and sense of humor, particularly regarding farming, explaining in his blog “Monster Hunter Nation,” that, as a child, he received a “black belt in the ancient art of Portuguese Shovel Fighting, because nothing motivates a Holstein to move its fat ass into the milk barn like a good shovel on the snout.”

An excerpt from his book Hard Magic illustrates conflicts during the Great Depression between the Portuguese and Oklahoma migrant farmers: 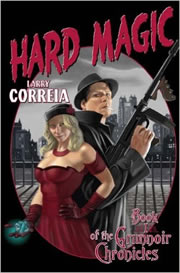 It always amazed him how much the Okies could fit onto an old Model T. He’d come from Terceira on a steamship, spending weeks in a steel hole between hot steam pipes. He’d owned a blanket, one pair of pants, a hat, and a pair of shoes with holes in them. He’d worked his ass off in a Portuguese town in Rhode Island, neck deep in fish guts, married a nice Portuguese girl, even if she was from the screwed up island of St. George, which everybody from Terceira knew was the ass crack of the Azores, and saved up enough money doing odd jobs to come out here to another Portuguese town and buy some scrawny Holsteins. Five cows, a bull, and twenty years of backbreaking labor had turned into a hundred and twenty cows, fifty acres, a Ford tractor, a Dodge pickup, a good milk barn, and a house with six whole rooms. By Portuguese standards, he was living like a king.

In this interview for the Portuguese American Journal, Larry Correia speaks with pride of his Portuguese heritage with roots on Terceira, Azores, and of his literary career. The interview was edited for length and clarity.

Hard Magic, the first in your Grimnoir Chronicles series, (takes place in the 1930-40s) and has an old Portuguese farmer who runs a dairy in central California. Was this character based on someone you know?

A: I based Traveling Joe on my grandfather, Joe Correia. He was also originally from Terceira, built a dairy in El Nido, California, and spent a lot of time complaining about the Okies.

Though I’m pretty sure the real life version never had magical powers. Those scenes were a lot of fun to write just because I was able to use my own upbringing and background, and tie it in with family stories from generations ago.One of my favorite reviews of Hard Magic was from a dairy farmer in upstate New York, and he said it was obvious that the author knew what it was like to work with cows. I sure do.

Does your motto of “Work your own ass off because nobody else can do it for you, and why should they?” stems from the Portuguese tradition of a strong work ethic?

A: It does. I grew up around a bunch of folks with that attitude. I’m proud of that.
You work hard to better yourself and your family, and if you do it right, your kids will have far more opportunities than you did. My grandparents’ generation came here with nothing, built something, and my dad grew up in America. He worked hard, made mistakes along the way, but I got a lot of opportunities that he never did. Now I’m trying to pass that along to my kids. Who knows what they can accomplish?

How have you utilized your Portuguese roots in your writing?

A: Because we are such a relatively small group in America, I’ve tried to stick interesting Portuguese characters into every series I write. We mentioned Traveling Joe already. In Dead Six the main character’s best friend is Carl Gomes, who had been a soldier in Angola. In Monster Hunter International, my bad guy was a cursed conquistador, but instead of being the typical expected Spanish, Machado was Portuguese, and had been sent to Brazil.

Do you feel a connection to the Portuguese-American community?

A: I still do, but now I live in a rural small town in the mountains of northern Utah, where there aren’t any other Portuguese people. So basically we’re on our own, though I’ve still tried to instill a sense of pride in my children about where their ancestors come from.

What is your heritage? Are you first or second generation? What part of Portugal is your family from?

A: I’m actually third generation. My dad is all Portuguese, but my mom is a little bit of everything. His grandparents were mostly from Terceira with one from Faial.
I went to a lot of festas, Atwater, Buhach, and Gustine mostly. My grandpa used to donate a cow every year.

In between working on the dairy farm, you read a lot of books as a child Louis L’Amour’s entire collection, Sword of Shannara by Terry Brooks. Raymond E. Feist and David Eddings—what book encouraged you the most to become a writer?

A: That’s a really tough one.I always loved to write, but truthfully, the book that encouraged me the most to really try to become a professional wasn’t one I read as a kid, but rather one that I read in college. It was a number one New York Times bestseller, but it was horrible. I won’t name it now, because I’ve since met the author and he’s a nice guy, but it was a boring, badly written, predictable book. I told my wife that if this could be the bestselling book in the country, then I could at least get published!

When you were in high school, your family lost the dairy farm and moved to Utah! Was that a culture shock?

A: It was certainly different in a lot of ways, but we moved to another farming community in the middle of nowhere, so there were a lot of similarities too.

There are those who call Portuguese the “silent minority” why do you think we are so invisible in the US?

A: I think there are a few reasons, just statistically there aren’t that many of us compared to some other groups. Then, if you look at where Portuguese immigrants settled, in the east it was around coastal fishing jobs in Massachusetts and Rhode Island, and in the west it was in rural California farming towns. Neither of those places is exactly cultural trend setting type locations. You settle in New York City and build a bunch of restaurants, businesses, and hold a parade, people see your culture. You milk cows in the San Joaquin Valley and mostly keep to yourselves, it isn’t as noticeable.

What Portuguese food did you grow up with?

A: I love food, but this is one area where I really missed out. My Portuguese grandmother was a terrible cook. I’m not exaggerating. We used to say that her idea of chicken soup was running warm tap water through a chicken.

My dad was in his late teens before he understood why people liked steak, because to him, steak was the dried out, flavorless hunks of retired milk cow he ate every day. Luckily, I did have some friend’s moms who could cook Portuguese food. It was amazing. That’s where I decided that I like putting paprika on everything.

I still love linguiça. In fact, I couldn’t get it around here forever, but then a few years ago it started to catch on with a few different butchers in Utah. I was in heaven. I fry linguiça for breakfast a couple of times a week now.

Sarah Hoyt is another author who is at the same publishing house as I am, and she grew up in mainland Portugal and came to America in her twenties. For Christmas she sent me a big box of assorted Portuguese sausages and cheeses that I’d never tried before.

In terms of controversies you have encountered in your career, which concern you most?

A: I really hate the stifling of free speech because of political correctness. There are a lot of authors who self-censor their work because they are afraid of offending the perpetually offended. Writers end up walking on egg shells rather than risk ending up as the target of some Twitter witch hunt. Art suffers, creativity suffers, and worst of all it drives off readers. Authors with the “wrong” politics have to hide them. It annoys me to no end.

A: My next book is called Son of the Black Sword, and it comes out in October. It is the first book in a new epic fantasy series. It is about the rise of a hero and the beginning of a rebellion in a land that’s surrounded by an ocean of demons. There’s a brutal caste system, a tyrannical government that has banned religion, and the main character starts out as a sort of roving, magical law enforcement officer, but ends up as a cross between George Washington and the Punisher. I’m really proud of this one. 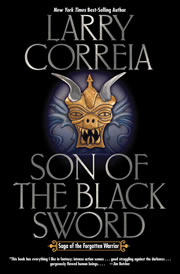 Excerpt from Son of the Black Sword

The familiar dream was always the same. He was on his knees, wiping a stone floor clean. The rag soaked up the red puddle, a mixture of soapy water and blood. When he wrung the tattered cloth out over his washbucket it ran in pink rivulets across his hands, a child’s hands.

A noise intruded on the dream, waking him.

He moved one hand to his sword, and in the hazy moment between sleep and reality, it still seemed to be a child’s hand, dripping with watered-down blood, but the dream faded and reality returned. Now it was a man’s hand, callused by training and scarred by battle. That hand belonged to Protector of the Law, twenty-year senior Ashok Vadal, and he did not clean blood. He spilled it.

Listening carefully, Ashok decided that the noise had come from just outside his tent. A warrior had approached, then stopped there probably to gather up his courage before waking their honored guest. Ashok relaxed and released Angruvadal’s grip. Reaching for it first was an old habit. If the sword needed to be drawn, it would have told him.