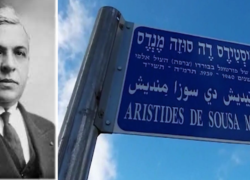 The city of Jerusalem dedicated a square in memory of Aristides de Sousa Mendes, the Portuguese diplomat who rescued thousands of Holocaust victims while stationed in Bordeaux, France, in 1940.

Estimates suggest that Sousa Mendes saved 30,000 people during World War II, of whom 10,000 were Jewish, although an exact figure has not been established.

The memorial was marked by a sign in Hebrew, Arabic and English, which reads: “Aristides de Sousa Mendes Square, Consul General of Portugal in Bordeaux (France), saved thousands of Jews during the years 1939-40.”

In 1966, Sousa Mendes was named “Righteous Among the Nations” by the State of Israel.

“This small area of ​​Jerusalem, the Eternal City, now bears the name of a hero. Consider the thousands of people who pass through here every day. Perhaps the vast majority of them were Jews.” Those were saved as a result of the bravery of Ambassador Sousa Mendes,” Mayor Lion said.

“Today’s tribute is an opportunity to see this man within himself in search of the values ​​of peace, love, humanity and compassion for one another. “Without knowledge of the past, we cannot understand the present or the future. We must keep in mind,” Ambassador Cabral said.

Yet, despite his humanitarian deeds, Sousa Mendes was recalled back to Lisbon during the war for defying  the infamous “Circular 14” decree which forbade the country’s diplomats from, among other things, issuing visas to Jewish refugees.

Mendes disobeyed by issuing visas to all who wanted to escape the growing terror of Nazi Germany, despite the risks to themselves and their families. For this he was blacklisted and subsequently fell into poverty. Lisbon’s Jewish community fed him and his family in their community soup kitchen

The memorial was promoted by historian Dr. Mordecai Paldiel, who serves on the Board of the Sousa Mendes Foundation and who was previously the Director of the Department for the Righteous at Yad Vashem.

“Sousa Mendes is one of a group of diplomats honored by Yad Vashem as Righteous Among the Nations for helping Jews avoid deportation by granting them visas to other countries,” Dr. Paldiel says. “However, he stands out from others as the only one who disobeyed direct and clear orders from his superiors not to grant such visas to Jewish refugees and was consequently severely punished by immediate dismissal from his diplomatic post. He remains an example of what a difference one person can make in the pursuit of goodness,” Dr. Paldiel stated.

Although his actions were not duly acknowledged during his lifetime, Sousa Mendes has been since recognized in his native country and around the world.

In Portugal, in 1995, the President of Portugal, Mário Soares, posthumously bestowed Portugal’s highest honor, the Grand Cross of the Order of Liberty. In 1987, former Portuguese President Mário Soares offered an apology to the Sousa Mendes family in the name of the Portuguese Nation. In 1989 Sousa Mendes was reinstated and recognized posthumously by the Portuguese Parliament with the rank of Ambassador. In 2020 a monument was dedicated to him in Lisbon and TAP Air Portugal had an airplane named after him in 2014. In 2020 the Portuguese Parliament voted to dedicate a memorial in the National Pantheon in his honor.

In November 2021, Congressman Jim Costa (CA-16), Co-Chair of the Portuguese American Caucus introduced a bipartisan resolution, H.Res. 807, honoring the life and legacy. In 1986, the U.S. Congress had proclaimed him a hero.

In September 2022, at the initiative of the Paris City Council, a promenade named after Aristides de Sousa Mendes was inaugurated in Paris, France. He was also honored with memorials in Toronto and Montreal in Canada.