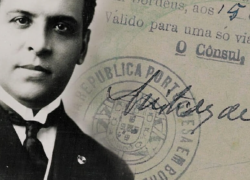 Congressman Jim Costa (CA-16), Co-Chair of the Portuguese American Caucus introduced a bipartisan resolution, H.Res. 807, honoring the life and legacy of Aristides de Sousa Mendes, a distinguished Portuguese diplomat who saved the lives of nearly 30,000 people from the terror of the Holocaust.

“Aristides de Sousa Mendes was a great hero of World War ll and is believed to have conducted the largest rescue by a single individual during the Holocaust.” said Costa. “He followed his conscience and risked everything to save thousands of people. His act of heroism inspires us to protect the dignity of others, especially those seeking refuge.”

In 1995, the President of Portugal, Mário Soares, posthumously bestowed Portugal’s highest honor, the Grand Cross of the Order of Liberty, on Sousa Mendes. On October 19th, 2021, Sousa Mendes was laid to rest in the National Pantheon in Lisbon.

H.Res. 807 is a companion resolution to S.Res.186, introduced by Senator Mitt Romney (UT) and passed the Senate by unanimous consent in April.