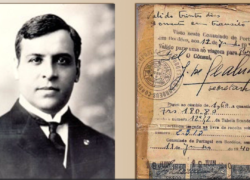 Portugal his honoring former diplomat Aristides de Sousa Mendes, on October 5th, with a ceremony at the National Pantheon, following a resolution approved by the Portuguese Parliament.

The ceremony to be held on October 19, will be symbolic, in the form of an empty tomb, without the transfer of his remains from his birthplace in Carregal do Sal.

The National Pantheon, located in the Church of Santa Engrácia, in Lisbon, is a memorial resting place where national heroes and public personalities are buried.

During World War II, Aristides de Sousa Mendes, then consul of Portugal in Bordeaux, France, issued visas that saved thousands of people from the Holocaust, disobeying the orders of António de Oliveira Salazar, the President of Portugal.

In November 1939, Salazar had issued a secret proviso, known as “Circular 14” ordering Portuguese consulates to “refuse visas to foreigners of undefined, contested or disputed nationality, stateless persons and Jews expelled from the countries of their nationality or from which they came.”

In defiance of these orders, Aristides de Sousa Mendes was recalled to Lisbon on July 8, 1940. A father of 14 children, who had loyally served as a diplomat for 32 years, he was forced into retirement and disbarred from practicing law. On April 3, 1954, Aristides died a pauper in the Franciscan Hospital in Lisbon. He was buried in a Franciscan habit.

For his actions, Aristides de Sousa Mendes received in 1966 the title of “Righteous Among the Nations” awarded by Yad Vashem (Holocaust Memorial), on behalf of Israel, to non-Jews who risked their lives to save Jews during World War II.

The recipient of many honors and awards, on June 17, 2020, during his General Audience, Pope Francis marked the “Day of Conscience,” inspired by the deeds of Sousa Mendes, by appealing that freedom of conscience be respected always and everywhere.

Most recently, the US Senate passed a resolution on March 3, 2021, honoring Aristides de Sousa Mendes. On July 19, 2021, the day of his 136th birthday, his bust was unveiled inside Portugal’s Parliament chamber. A public space in Paris, France, will be dedicated to him, in 2022, with a plaque on his honor.

In the United States he is represented by the Sousa Mendes Foundation, founded in 2010, dedicated to honoring his memory. Its aim is to educate the world about his good work, with the mission to raising funds for the creation of a Sousa Mendes Museum and Human Rights Center in Portugal and sponsoring US-based projects that perpetuate his legacy.