The Portuguese Parliament has voted to honor Aristides de Sousa Mendes (1885-1954), who saved thousands of lives during WWII, by creating a monument to memorialize him at the National Pantheon, the place where some of the most notable Portuguese personalities are buried.

The resolution stated, “Aristides Sousa Mendes, as a heroic historical figure, is part of Portugal’s national patrimony,” and that “A moral legacy for all, his heritage is for the whole of civil society and above all a virtuous example for future generations.”

Aristides de Sousa Mendes was the Portuguese Consul General in Bordeaux, France, during the war, known for having issued visas to refugees, fleeing the Nazi invasion (1939-1940), without regard to nationality or religion, saving about 30,000 lives, including 10,000 Jews, by disobeying orders from Portuguese dictator António Oliveira Salazar.

Israeli historian, Professor Yehuda Bauer has affirmed that his deed is “Perhaps the largest rescue action by a single individual during the Holocaust.” 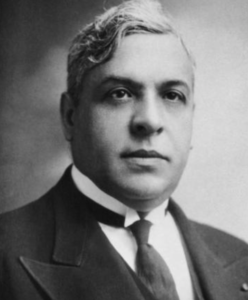 Sousa Mendes disobeyed Salazar’s orders that would only permit holders of visas to other countries to stay in Portugal temporarily and, according to a document known as “Circular 14,” issued on November 11, 1939, specifically excluded Jews and other groups of refugees from entering the country.

He was disciplined by Salazar who recalled him to Lisbon, from his post in Bordeaux, and subjected him to disciplinary action by stripping him of his diplomatic position, blacklisting from employment and denying him his pension.

Moreover, a lawyer by training, after being dismissed from is diplomatic post, Sousa Mendes was disbarred by Salazar and not allowed to practice law.

Sousa Mendes, the father of 14 children, explained his actions: “If thousands of Jews are suffering because of one Christian (Hitler), surely one Christian may suffer for so many Jews.”

Only with the assistance of a Jewish welfare group he and his children were able to survive. He died in 1954 in obscurity, a pauper and disgraced man in Portugal. 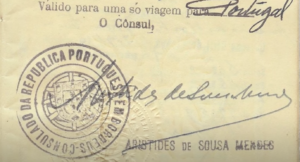 Yet, he knew his actions had been justified in saving thousands of innocent lives. As he put it himself, “I could not have acted otherwise, and I, therefore, accept all that has befallen me with love.”

Thanks to the testimony of many holocaust survivors — among them members of the Rothschild family, art dealer Paul Rosenberg, and numerous academics and artists — Sousa Mendes receive due credit for his courageous actions in his native country and abroad.

On June 17, during his General Audience, Pope Francis marked the “Day of Conscience,” inspired by the deeds of Sousa Mendes, by appealing that freedom of conscience be respected always and everywhere.

Evoking his name, the Pope stated that “freedom of conscience always and everywhere be respected.”  “May every Christian”, he said, “give an example of the consistency of an upright conscience enlightened by the Word of God.”

In 1961, the Prime Minister of Israel, David Ben-Gurion, ordered that twenty trees be planted in Aristides de Sousa Mendes memory. In 1966, the State of Israel honored him as “Righteous Among the Nations” by Yad Vashem (the Israeli Holocaust Memorial Authority) an accolade only reserved to those who have endangered their lives to saving Jews during the Holocaust.

In 1986, he received the Portugal’s “Grand Order of Freedom” one of the highest Portuguese honorific civil orders distinguishing relevant services to the cause of democracy and freedom. In the same year, the US Congress recognized him for him for his humanitarian actions proclaimed Sousa Mendes a hero.

In 1987, he was awarded the prestigious “Order of Liberty” medal by the Portuguese government, bestowed by Presidents Mário Soares. At the time, President Soares offered an apology to the Sousa Mendes family in the name of the Portuguese Nation for the mistreatment he suffered under the Salazar regime. President Soares declared Sousa Mendes to be “Portugal’s greatest hero of the twentieth century.”

In 1988, the Portuguese Parliament dismissed charges against him and reinstated him in the diplomatic corps with the rank of Ambassador.

In 1995, he was also honored with the “Grand Cross of the Order of Christ.” In the same year, the “Comité National Français en Hommage à Aristides the Sousa Mendes” was established in Bordeaux, France, where President Soares dedicated a bust of Sousa Mendes.

In 2014, TAP Air Portugal named a new aircraft after the Portuguese humanitarian.  and n 2017, the President of Portugal, Marcelo Rebelo de Sousa, awarded Aristides de Sousa Mendes with the “Grand Cross of the Order of Freedom”, on the 63rd anniversary of the Portuguese diplomat’s death.

In the United States he is represented by the Sousa Mendes Foundation, founded in 2010, dedicated to honoring his memory. Its aim is to educate the world about his good work, with the mission to raising funds for the creation of a Sousa Mendes Museum and Human Rights Center in Portugal and sponsoring US-based projects that perpetuate his legacy. The Foundation’s major current initiative is a Visa Recipient Database Project, for which it is seeking to identify, locate and contact families worldwide who were rescued by him. Read more >>