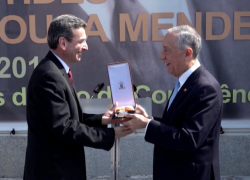 The President of Portugal, Marcelo Rebelo de Sousa, awarded Aristides de Sousa Mendes (1885-1954), with the Grand Cross of the Order of Freedom, on the 63rd anniversary of the Portuguese diplomat’s death.

The ceremony was held this week in front of the Sousa Mendes’ family home, Casa do Passal, in Cabanas de Viriato, Portugal. Casa do Passal, which was classified as a national monument in 2011, is undergoing restauration from ruin and will be converted into a museum.

The award was presented to Gerald Mendes, grandson of Aristides de Sousa Mendes, the former Portuguese Consul in Bordeaux (France).

Aristides de Sousa Mendes is recognized for issuing visas to WWII refugees, without regard to nationality or religion, saving thousands of lives including 10,000 Jews, by disobeying orders from Portuguese dictator of António Oliveira Salazar.

“This is a very special honor, given at a time when the tragedies of new wars and persecutions bring painful images of rootless people looking for a land of freedom, in what is today the worst refugee crisis since the Second World War,” President Rebelo de Sousa remarked.

Aristides de Sousa Mendes was previously decorated in 1986 with the title of Officer of the Order of Freedom and, in 1995, with the Grand Cross of the Order of Christ. In 2014, TAP Air Portugal named a new aircraft after the Portuguese humanitarian.

The Grand Order of Freedom, established in 1976, is one of the highest Portuguese honorific civil orders distinguishing relevant services to the cause of democracy and freedom, in the defense of the values of civilization and human dignity.