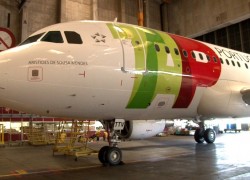 TAP Air Portugal has named its newest Airbus A319, the CS-TTV, after Aristides de Sousa Mendes as a tribute to the Portuguese Consul in Bordeaux, France, who saved thousands of lives at the time of Germany’s invasion of France during World War II.  The honor marks the 60th anniversary of the diplomat’s death.

The “Aristides de Sousa Mendes” whose maiden flight connected Lisbon /Madrid on Monday, September 6, will fly to 55 destinations in Europe.

To mark the new aircraft’s entry into service, TAP has been screening the film “Aristides de Sousa Mendes, o Cônsul de Bordéus” on board its long-haul flights.