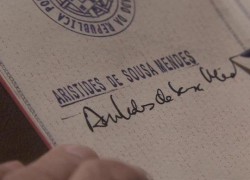 The City of Toronto will name its newly renovated playground in honor of Aristides de Sousa Mendes, in a ceremony to be held October 20, starting at 1:30 pm, at Arlington Parkette, 460 Arlington Avenue, Toronto.

The Sousa Mendes Playground dedication ceremony and the unveiling of a plaque is co-sponsored by the Sousa Mendes Foundation, the Associação Cultural 25 de Abril, the Leo Baeck Day School, the Centre for Jewish and Israel Affairs, and the UJA Federation of Greater Toronto.

Presided by City of Toronto Councillor Joe Mihevc (Ward 21 St. Paul’s), the event includes speakers from the Jewish and Portuguese communities. Members of the Sousa Mendes family and recipients or family members of recipients of visas from Sousa Mendes will be present.

After the dedication and unveiling ceremonies, a reception and screening of  Disobedience: The Sousa Mendes Story, directed by Joel Santoni and starring Bernard Le Coq, will take place at the Leo Baeck Day School, 501 Arlington Ave, Toronto.

The event, free and open to the public, is listed as a Holocaust Education Week activity and will feature performances from the Jewish and Portuguese communities.

Aristides de Sousa Mendes, known as the “Portuguese Schindler,” was a Portuguese diplomat in France during WWII who disobeyed the orders of his government and granted visas out of the Nazi-occupied country to 30,000 refugees, including 12,000 Jews. Sousa Mendes’ effort during the war has been regarded as “the largest rescue action by a single individual during the Holocaust.”