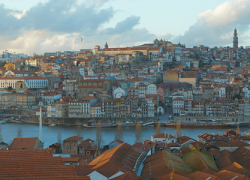 Ambassador of Portugal and Mrs. Domingos Fezas Vital hosted friends of Portugal for a special screening of “A Year in Port” – a fascinating documentary about the wine chosen by America’s Founding Fathers to celebrate US Independence. The guests included diplomats, scholars, musicians, business professionals and of course Port wine enthusiasts. Among the dignitaries were Icelandic Ambassador Geir Haarde and his wife Inga Jona Thordardottir, Embassy Series Founders Jerome and Lisette Barry and US Energy Association Director, Randall Roe.

Before the viewing began Ambassador Vital shared the breaking news about the documentary’s award – 1st place in the Rhode Island Film Festival. He also shared the raving reviews by the Wine Spectator about the Portuguese wines. 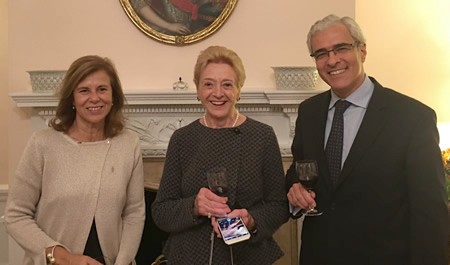 Ambassador Vital introduced the charming documentary producer Ms. Martine Saunier, whose presence made the evening so special because she was able to tell how the documentary came about.

From the biographical notes, the audience learned about Martine’s French origin as she was born in Paris but emigrated to US at a very young age. A glimpse of her steely determination and initiative in her website which states: “Martine was offered the job of selecting wines for an importer/distributor in San Francisco. Still dismayed by the absence of many of her favorite wines, she started making buying trips to France. In the spring of 1969, she flew to Burgundy, bought a small VW bug, and started her tour and career. At first, she kept close to familiar sources, namely Beaujolais, Mâcon and Pouilly-Fuissé, but eventually she ventured into the Côtes-du-Rhône on the lookout for some Châteauneuf-du-Pape.”

The documentary is a collaborative effort by Martine and a highly acclaimed director David Kennard. It tells a compelling story of Port- about the “birthplace of Port wine… where time is measured in generations.” The narration by Kennard really pulls in the viewers’ interests because while describing how and where the wine originated from, the documentary educates about the wine trade, history, geology, sports and much more. The story starts in London and then moves from country to country and throughout the Douro Valley in Portugal – home to the Port Wine and trade. Martine is seen throughout the documentary in different settings which include in-depth discussions with members of the key families who make the Port wine. Through this story the viewers learn about the 600 year old unbroken ties between Portugal and the United Kingdom, whose merchants in London continue to play a pivotal role in this elegant beverage that lubricates many interesting conversations. Viewers also learn about enduring familial traditions including the game of cricket played in the Douro Valley with the proper decorum and afternoon tea in Portugal.

The documentary which informed the distinguished guests was followed by an elegant reception featuring Port wines and cheeses prepared by the Embassy Chef. It was an evening that many will remember for the warmth of the Portuguese Ambassador and his wife and the staff for extending the hands in friendship that has lasted more than two centuries between Portugal and US. 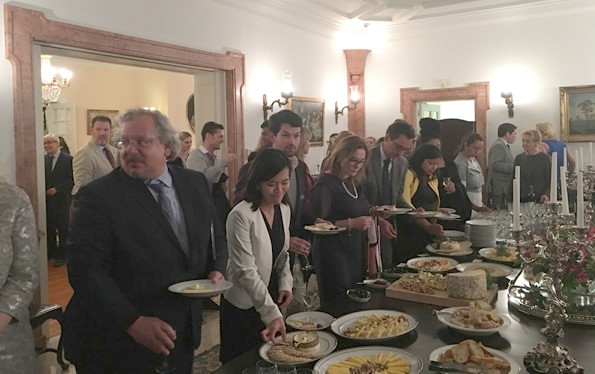