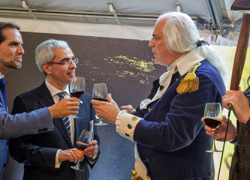 The Portuguese Ambassador Domingos Fezas Vital, together with Honorable Miguel Albuquerque, President of the Regional Government of Madeira, hosted a hundreds of guests to commemorate American Independence and the reinvigorate the historical ties between Portugal and the United States. The event was marked by style as well as substance.

About 400 people – including members of the Portuguese American community, members of Congress, Federal Government, diplomats, businessmen, journalists and academics in Washington – braved the torrential rain in Washington for this historic event. It underscored how Ambassador Vital likes to describe Portugal as “America’s closest neighbor across the ocean.”

Like the weather, international relations between sovereign nations have both cloudy and sunny days. In the case of Portugal, however, the relations can be understood by the US Department of State’s position: “United States-Portugal bilateral ties date from the earliest years of the United States when Portugal was among the first countries to recognize the United States following the revolutionary war. The oldest continuously-operating U.S. Consulate is in Ponta Delgada on the island of Sao Miguel in the Azores. Contributing to the strong ties between the United States and Portugal are the presence of sizeable Portuguese communities in Massachusetts, Rhode Island, New Jersey, California, and Hawaii.”

The spiritual evocation of history is recorded in the Portuguese Embassy’s notes about this event on June 28, 2016 as: “’Toast to America’ replicated one of the defining moments of the signing ceremony of the Declaration of Independence in 1776. The Founding Fathers raised a glass of Madeira wine for a joyful commemoration of the institution of the United States of America.” In a very tasteful manner, the Embassy presented an actor who embodied the size and spirit of General George Washington. The historical reenactment became more enjoyable with bringing alive the memory of Peter Francisco – a Revolutionary War hero sometimes referred to as the Virginia Hercules. The most memorable line by George Washington on this evening was that “without him, we would have lost two crucial battles, perhaps the war, and with it our freedom. He was truly a one-man army”. The banter between the historical figures drowned out the noise of the heavy downpour on the large tents covering the guests of the ceremony.

Music, culture and cuisine serve as the key ingredients of keeping the close ties between the United States and Portugal. A wonderful performance by the Madeira folklore group, based in New Bedford, Ma., “Grupo Folclórico do Clube Madeirense S.S. Sacramento”, entertained guests with the traditional sounds and colorful costumes of Madeira. Appreciation of the Madeira wine blended well with the food prepared by Portuguese Chef George Mendes.

Through his sincere remarks, guests came across with a belief that Ambassador Fezas Vital, and his wife, Isabel, are determined to organize the “Toast to America” celebration every year. By choosing the perfect timing i.e. a few days before the huge celebration on the Mall in Washington on July 4th, they have reinforced historical ties between the United States and Portugal. In doing so, they have made them more meaningful in period of rough weather on the international horizon. 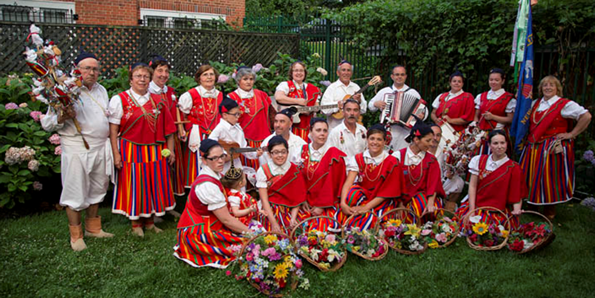