Portugal: Minister of the Sea addresses the Atlantic Council – Washington,DC 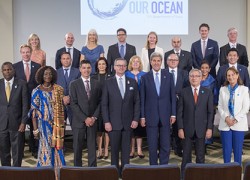 The Atlantic Council – a Washington based think tank – presented Portugal’s Minister of the Sea, Ms. Ana Paula Vitorino to discuss strategic areas of cooperation between two natural allies. “Bilateral ties date from the earliest years of the United State” and “Following the American Revolutionary War, Portugal was the first neutral country to recognize the United States,” said Minister Vitorino. This is also an unmistakable reminder to audiences in Washington by Ambassador Domingos Fezas Vital, who also attended the fascinating discussion on the possibilities of strategic cooperation.

The event was hosted by the Atlantic Council Eurasian Energy Futures Initiative. David Koranyi, Director, Eurasian Energy Futures Initiative, Atlantic Council welcomed Minister Vitorino and noted Portugal’s long history of maritime tradition. Director Koranyi informed the audience that Minister Vitorino was a guest of US Secretary of State for “Our Ocean” Conference – which according to the U.S. Department of State is focusing “on the key ocean issues of our time – marine protected areas, sustainable fisheries, marine pollution, and climate-related impacts on the ocean.” 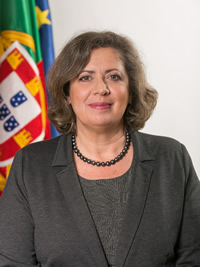 Minister Vitorino remarks – facilitated with a PowerPoint presentation – at the Atlantic Council drew attention to “the future development of the North Atlantic between the United States and Portugal as an energy and resource hub.” The Atlantic Council’s website notes Minister Vitorino’s citing “that offshore oil and gas, US LNG shipments, deep-sea mining, and ocean renewable projects will diversify Western Europe’s energy needs.”

According to her bio, Minister Vitorino “has 30 years of experience as a specialist in the field of transport and infrastructure and the Economy of the Sea. She combines a high academic preparation with university academic career, scientific research, and a large experience in consulting activities and in the management of companies and entities, public and private, of these sectors.”

• Portugal is the European maritime frontier of United States, with the Azores archipelago—a distance of four thousand kilometers between US and Portuguese shores—as the main point of contact.

• US has the largest ocean territory in the world, with an Exclusive Economic Zone (EEZ) of nearly eleven and a half million square kilometers.

• Portugal—which has the 110th-smallest land area on the planet—has the 20th largest ocean territory in the world, comprising an EEZ of nearly two million square kilometers.

In presenting the new areas of cooperation between US and Portugal, Minister Vitorino discussed in detail the four main points from the Economy and Energy perspective:

Through an engaging conversation moderated by Eurasian Energy Futures Initiative Assistant Director, Bina Hussein, Minister Vitorino communicated her ideas about the areas of strategic cooperation between Portugal and US with remarkable precision yet in a self-effacing manner.
By organizing this informative and interesting event, the Atlantic Council gave meaning to its motto: “working together to secure the future.” For those attending this event, it was a time well spent to get an in-depth understanding of the areas of strategic cooperation “between US and its closest neighbor across the Atlantic Ocean,” as per Ambassador Vital. 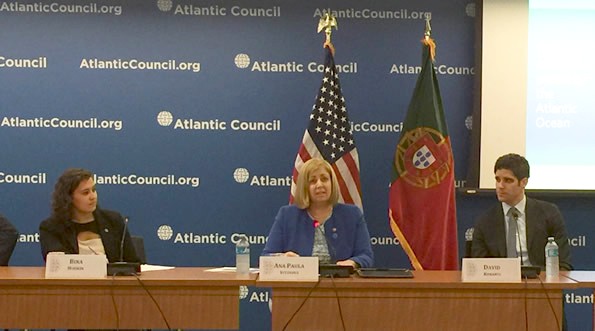