Anthony Barcellos: The author of “Land of Milk and Money” – Interview 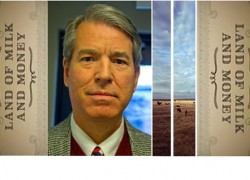 Anthony Barcellos is probably best known for his calculus blog and the papers he assigns in his math classes at American River College in Sacramento, CA.  Reared on his grandfather’s dairy farm in Porterville, a small town in California’s Tulare County, he grew up speaking Portuguese.  His new novel, Land of Milk and Money, tells the story of the Francisco family, Portuguese immigrants who build a prosperous dairy farm. Their success is built on memories of the Azores and Old Country values.  The legacy of the older generation is threatened when descendants compete for their inheritance. As matriarch, Teresa had devoted her life to nurturing her family. But when she dies, family feuds become public and burst into the courtroom.

Before publishing a novel, Barcellos devoted his literary talents to science reporting, computer technology, and mathematics.  He served as a legislative assistant to state Senator Albert S. Rodda in 1979-1980 and worked for the Commission on State Finance (1981-1987) under State Treasurer Jesse M. Unruh.  In 1987, he was hired on the mathematics faculty at American River College in Sacramento, where in 1996 the students chose him as Instructor of the Year.

Barcellos resides in Davis, California.  He earned a master’s degree in mathematics from California State University, Fresno (1974), a bachelor’s degree from the California Institute of Technology (1973), and an associate’s degree from Porterville College (1971).

Anthony Barcellos is a tall, affable man with a broad smile and a love for Wagner’s operas. In this interview for the Portuguese American Journal, he speaks of his working-class background,  growing up in the San Joaquin Valley California, in a Portuguese-American community with roots in the Azores, and how his immigrant family’s epic story inspired him to write.

Much of your novel, Land of Milk and Money, takes place in California’s Central Valley. What was it like growing up as a Portuguese-American in Tulare County? Did you and your family speak Portuguese at home? Do you still speak Portuguese?

When I was a child in the fifties, Portuguese was the language of our household and I learned it before I learned any English. My Portuguese remains fluent but rudimentary, a spoken language I used with family members but not for reading or writing. Being a Portuguese-American (or, more specifically, an Azorean-American) was entirely unremarkable in Tulare County, where an extended network of family members and friends provided a friendly and comfortable environment for Azorean immigrants and their descendants.

As you were growing up, did you have a sense that the Porterville area was viewed as a kind of new Canaan for Portuguese-American dairy farmers?

Not so much Porterville specifically as Tulare County in general. Porterville was best known for its citrus and walnut orchards (Sunkist was a major employer in the city and my high school colors were orange and green). Porterville nestled against the Sierra Nevada foothills on the east side of the San Joaquin Valley. Portuguese-American dairy farmers established their operations on the flatlands of the valley, ringing the more centrally located cities like Tulare.

When you were growing up on the dairy farm what role did you have in daily operations? What chores or duties did you perform? How does your working class background influence your writing?

By the age of eight or so, I could drive a tractor and pull a flatbed trailer while another family member or one of the dairy’s employees distributed hay into the mangers of the livestock corrals. By ten or twelve, I could do the feeding myself (with my younger brother driving). We did mostly the afternoon feeding except on weekends, when employees took time off and family members took over the early morning feeding as well. We tended to alternate with our cousins, our uncle’s sons, in the feeding duties. In the fields I ran the hay chopper, operated the swather, cleared cotton fields after harvest with the stalk-chopper, and gathered up alfalfa for the baler with the tractor-towed rake. I never graduated to operation of the hay baler or cotton picker because my brother and cousins were always first in line for those glamorous jobs and I did not put myself forward. I also never worked in the dairy barn, since we had hired full-time milkers by the time I was old enough to handle the milking equipment and other family members filled in when the regular milkers were off duty.

As far as I can tell, apart from having supplied me with a wealth of material on dairy farming that I used in my novel, my working-class background had no significant impact on my writing or writing style. The fact that English is my second language is probably of greater influence, perhaps making my prose a little more formal than average and giving me a taste for Latin-derived vocabulary.

What role did Porterville College have in your development as an emerging scholar? What classes or teachers influenced you?

My public schools in Porterville were always supportive of my interest in math, science, and reading. Mrs. Inez Bush, my fourth-grade teacher at Pleasant View Elementary, encouraged my writing by connecting me with a British pen pal. Mr. Louis Hunt in sixth grade put his entire classroom library of biographies and history at my disposal, and I read through the whole collection. Mr. Roy Baxley, the principal, allowed me to sit in his office anteroom and peruse readers and textbooks that were available as supplements to our state-approved texts; he let me borrow any I wanted to read. All of my English teachers at Porterville High School were enthusiastic proponents of reading and encouraged my writing of essays and short stories. By the time I reached Porterville College I considered myself a math major and my calculus teacher, Mr. Clyde Wilcoxon, became a major influence in my style and approach to teaching. I breezed through English composition classes on the strength of my high school training and insatiable reading, the latter giving me a level of comfort in writing that has served me in excellent stead.

One of your characters in the novel—Paul Francisco—stands out to me as being very similar to you. Can you comment on that?

More than any other character in the book, Paul looks at the world through my eyes and speaks with my voice.

What does your family and friends in Porterville think of your novel?

While my sister cautioned me that my novel could stir up trouble, in general the family response has been positive and criticisms have been muted. Most seem to be pleased that I’ve chronicled an era in which my grandparents were part of the Portuguese-American community’s contribution to building up California’s robust agricultural industry, especially in the field of dairying. People also understand that Land of Milk and Money is a work of fiction, although it is based on several real-life incidents in Tulare County. The novel cannot be taken as a reliable guide to what motivated any real person or what any real person did.

There are quite a few funny moments in your novel, which did you most enjoy writing?

I chuckled aloud several times while working on “Junior tells on Jojo,” the sandbox colloquium on the Feast of the Circumcision. This episode was made up out of whole cloth, but pleased me very much as an opportunity to highlight the personalities of several of the Francisco boys. I’m also very fond of “Catarina’s wedding,” but that episode is as poignant as it is funny.

Most people think that writing and “doing math” are two very different pursuits. However, you regularly assign essays in your math classes. Why? How does writing and math cohere or come together for you? What’s the connection? Why do you spend so much extra time grading essays?

I assign essays to my calculus students, all of whom fancy themselves as future engineers, scientists, or mathematicians. In every high-tech occupation of this sort, people are expected to produce useful plans, experimental results, or calculations, but then they are expected to convey the results to their peers or supervisors. Great technical expertise is all but useless unless you can communicate with others. I learn a lot about my students by grading their essays, but I’m also giving them the opportunity (not always appreciated) to put their technical thoughts in prose that may be useful to them in the future.

You claim to have 30 bookcases at home and a house scattered with books. How did you get turned on to reading and writing?

It happened so far back that I cannot remember. I do know that both my father and his older sister (my godmother, to whom my novel is dedicated) were avid readers and collected many books. Hence they were always readily available to me from as far back as I can recall. I took to them naturally and eagerly. Once I joined book clubs and started ordering books for myself, my grandfather very generously subsidized my assembling of a library.

Who are your favorite novelists? Which novels? Which fiction writers may have influenced your writing?

I’m not conscious of being influenced by any particular writer’s style, although I imagine my personal style must be an assimilated amalgam of my favorites. In my youth I devoured all the novels of Edgar Rice Burroughs, H. Rider Haggard, Andre Norton, Robert Heinlein, Arthur C. Clarke, and Isaac Asimov. Today I’m a big fan of Iain M. Banks, Alastair Reynolds, and C. J. Cherryh. I read broadly, both fiction and nonfiction, and I always have two or three books in progress. My library contains complete sets of the works of Mark Twain and Charles Dickens, which will keep me occupied for quite a while.

I’m glad I did not read any of the work of Charles Reis Felix (published by Tagus Press) before writing Land of Milk and Money because I would be certain he had influenced me. We both wrote about our family histories in a discursive and episodic manner, so there are strong similarities (but I can only envy his talent for creating completely natural dialogue). However, I did not start working through some of the novels by Portuguese-American authors until after Land of Milk and Money was essentially completed. I have since read works by Katherine Vaz, Alfred Lewis, Julian Silva, and Álamo Oliveira.

Are you planning on writing another novel? Will there be a follow-up?

Yes and no. I have the kernel of a second novel in a subplot that was deleted from my manuscript (per editorial suggestions) to advance the main narrative. I’m toying with the idea of working on it this summer, but I have the advantage of not having to support myself by my writing. The novel will happen if I feel like it and the words begin to flow. But I’m not quitting my day job.