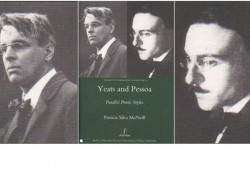 W.B. Yeats and Fernando Pessoa seem to be ill-suited for comparison.  True, they were both Modernist poets who were near contemporaries, but the Portuguese man-of-letters was hardly among Yeats’s literary friends.  Although he was conversant in English, Pessoa didn’t have the credentials that would have situated him in the elder poet’s social milieu.  Yeats’s cosmopolitanism was primarily limited to Britain and Ireland, with occasional book junkets to the United States and infrequent traipsing in France after his object amor Maud Gonne.  Yeats was reared in the language and literature of the English; he was not bilingual, not even in Irish.  Any communication between the two poets would have been one-sided with Pessoa as the initial correspondent.

In Yeats and Pessoa: Parallel Poetic Styles (Legenda Press 2010), Patricia Silva McNeill compares the two poets since, as she says, they both “emerged from smaller nations on the western periphery of Europe, each undergoing a distinct literary Renaissance or revival movement concomitant with the poets’ literary debuts.”  Although this may be true, we must not forget that literary production in both countries was significantly different.

Ireland was not yet an independent republic.  The literary renaissance that Yeats spearheaded with Isabella Augusta, Lady Gregory was an intervention against British colonialism and censorship that white-washed Irish culture.  Yeats’s “neo-Paganism” attempted to rehabilitate the riches of Celtic folklore, a dark Druid past, the “romantic Ireland” of Red Branch kings and Cuchulain myths.  This tradition culminated in the great popular ballads, songs, and poetry of Thomas Davis, Samuel Ferguson, and James Clarence Mangan.  Yeats became a leading figure in an important literary movement and his version of cultural rehabilitation appealed to Pessoa.

A letter in the Pessoa archive at the National Library in Lisbon reveals that the Portuguese poet intended to establish contact with Yeats.  As McNeill notes, “Pessoa’s letter to Yeats was intended as “an inquiry concerning the Irish movement in modern poetry and drama.”  Apparently, Pessoa was interested in following suit with a “Renascenca Portuguesa” under the leadership of Teixeira de Pascoaes.  To this end, Pessoa became familiar with Yeats by acquiring books that had been written, edited, or prefaced by him.  As McNeill says, “Books in Pessoa’s library confirms that he was acquainted with Yeats’s early poetry and drama, as well as with his role as editor and critic.”  This familiarity raises various issues of influence and reception.

The significance of McNeill’s scholarship is that it offers a comparative case studies approach.  She claims that “Yeats’s and Pessoa’s works, derived to a great extent from a lifelong commitment to what Pessoa called ‘outrar-se’ [self-othering] and Yeats ‘remaking,’ by resorting to compatible strategies of stylistic diversification.”  McNeill’s major premise is that Yeats and Pessoa shared stylistic procedures, such as the reformulation of a masked persona, and were inspired by the aestheticism of Oscar Wilde and Walter Pater. 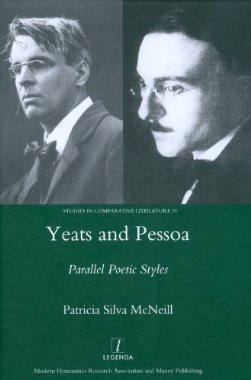 “Pater’s modern conception of literature provided a seminal inspiration for Yeats’s and Pessoa’s poetic praxis, enabling them to rehearse different poetic stances either latent in their multifaceted personalities.”  As we know, Yeats’s involvement with the Rhymer’s Club in the 1890’s introduced him to Pater’s Marius the Epicurean and the mask-wearing Mona Lisa of The Renaissance.

This stylistic allegiance, according to McNeill, required Yeats and Pessoa to “excise those aspects of existence that could not be incorporated into poetry” and required “self-transcendence through the adoption of antithetical stances as the embodiment of otherness.”  By means of their distilling personality and life, they achieved “greater metaphysical insight.”

However, the metaphysical aspects of their poetry are not merely stylistic flourishes based in aestheticism.  Although it’s true that Yeats’s understanding of Plato came through his study of Pater’s Plato and Platonism, and Plotinus, metaphysics was little more than stylistic exuberance for Pater and Wilde.  On the contrary, Yeats and Pessoa adopted metaphysics to substantiate their ideas and thicken the content of poetic form.  They studied philosophy independently of writing poetry, and numerous metaphysical concepts filtered into their work.

As much as he recognized Pater as a precursor of his personas, and even the prognosticator of his own symbolic “gem-like flame,” Yeats did not endorse aestheticism or the “Art for art’s sake” movement.  For him, as with Pessoa, the metaphysical dimension of poetry and prose had less to do with what McNeill calls the “religious feeling in operation as soul in style.”  Rather, both poets avowed the convergence of Self and Soul in the conical vortices of timeless archaic gyres–the metaphysical conditions of which required faculties of mind to forge images from words, and rhythms out of the music of Pythagorean spheres.

McNeill’s comparative project is original and demonstrates the stylistic affinities of these poets, but the aim of her study is buckshot that misses the target.  With chapter titles that begin with terms such “Post-Symbolist Style,” “Neo-Paganism,” and “Dramatic Poetics,” it seems curious that such wide-ranging ambition went from dissertation to a published book.

For me, the most appealing part of her study is the last chapter entitled “The Metaphysical Aesthetic.”  McNeill states the purpose of the chapter in abstract terms: “It traces the imagery of the circle and of the interval as symbolic of the poets’ pursuit for aesthetic and ontological unity and totality through diversity in their poetry… and appraises the poets’ ontological, epistemological, and metaphysical quest in their poetic oeuvres.”

Next, her discussion touches on Shelley, Arnold, and Pater.  Incidentally, Nietzsche is left with all the heavy philosophical lifting–the ontology, metaphysics, and epistemology.  This is truly well-worn territory–plenty of critical studies have engaged with these figures, especially Nietzsche.  With her emphasis on philosophy, I expected McNeill to address concepts and arguments that the two poets were familiar with.  However, her discussion reveals the limitations of most scholarship in the field: it lacks in-depth analysis of relevant philosophical concepts.

Rather, McNeill’s critical engagement remains abstract.  Here is an example: “Pessoa and Yeats envisaged writing as a philosophical inquiry into the nature of the Self and its position in the World which ultimately sought some sort of ontological and metaphysical revelation of the true nature of selfhood and existence.”  McNeill doesn’t unpack any of this language, nor does she explicate it in direct reference to the poetry.  Needless to say, ontology and metaphysics are nearly synonymous terms–genus and species–and just because Yeats refers to “elemental spirits” and Pessoa refers to “the last spell” or the sorceress of alchemical reactions, we needn’t identify these fancies as philosophically pertinent.

This is not to say that metaphysics is mysteriously embedded in Yeats’s or Pessoa’s work.  Certainly, Yeats’s “Unity of Being” is a metaphysical concept, and Pessoa’s heteronyms adopt various metaphysical views, such as Stoicism and Epicureanism, even a poetics of self-representation, but we expect criticism to proceed from abstraction to concrete explication.  Since so much has been written about the Apollonian and Dionysian drives in Yeats and Pessoa, respectively, I expected a more extensive treatment of metaphysics beyond the weary corpus of Nietzsche.  In other words, metaphysics needs to be treated on its own terms, not merely as an occult or poetic theme.  Yeats and Pessoa were genuinely interested in philosophy–metaphysics and epistemology–they didn’t merely create philosophical poetry–they made philosophy poetic.
_______________