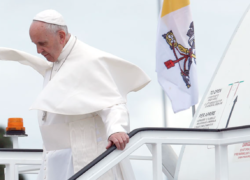 The Vatican has confirmed that Pope Francis plans to attend the World Youth Day (WYD), to be held in Lisbon, Portugal, August 1-6, 2023.

The event will draw huge crowds of Catholics from around the globe.

“It is with great joy that we reveal that the World Youth Day in Lisbon will take place from August 1st to 6th, 2023,” said Manuel Clemente, Cardinal-Patriarch of Lisbon.

In January 2019, Portuguese President Marcelo Rebelo de Sousa participated in Panama in the World Youth Day with Pope Francis, when it was announced that the next event would take place in Lisbon in 2022.

However, due to the COVID’19 pandemic, Pope Francis had to cancel the 2022 pastoral visit to Portugal. The event was then postponed to August 2023.

Pope Francis visited Portugal, for the first time in 2017, to mark the 100th anniversary of the Mary’s appearance in Fatima. Pope Paul VI had visited the Marian Sanctuary in May 1967, followed by Pope John Paul II in May 1987, and Pope Benedict XVI in May 2010.

The World Youth Day, the largest international event organized by the Catholic Church, is held annually at the local diocesan level on Palm Sunday (or on a date defined by each diocese), alternating with an international meeting every two or three years, in a large city. The international editions are weeklong religious and cultural events that bring hundreds of thousands of young people from around the world. The first World Youth Day was launched in 1986 by John Paul II and held for the first time in Rome.