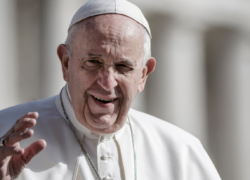 Due to the COVID19 pandemic, Pope Francis has cancelled his pastoral visit to Lisbon, Portugal, in 2022, to preside to the World Youth Day – the Vatican announced this Monday. The event was postponed to August 2023.

According to the announcement, “given the current health situation and its consequences, the Holy Father decided to postpone next World Youth Day, scheduled in Lisbon in August 2022.”

The director of the Holy See’s press room, Matteo Bruni, justified the decision with the “current health situation and its consequences on the displacement and agglomeration of young people and families.”

The World Youth Day, the largest event organized by the Catholic Church, was planned to take place in the headquarters in São Vicente de Fora, in the municipality of Lisbon.

In January 2019, the Roman Catholic Church announced that Pope Francis would preside to the 2022 World Youth Day in Lisbon, Portugal. The pronouncement was made at the closure of the World Youth Day held in Panama in 2019 before a crowd estimated at 700,000.

The World Youth Day is held annually at the local (diocesan) level on Palm Sunday (or on a date defined by each diocese), alternating with an international meeting every two or three years, in a large city. The international editions are religious and cultural events that bring together hundreds of thousands of young people from around the world, for about a week.