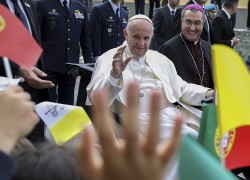 The Roman Catholic Church has announced that Pope Francis will preside to the 2022 World Youth Day to be held in Lisbon, Portugal.

The public pronouncement was made at the closure of the World Youth Day held in Panama last week.

The World Youth Day, launched by Pope John Paul II, draws hundreds of thousands of young people, from all over the world, with the goal to energizing the younger generations of Catholics to live their faith.

In Panama, Pope Francis formally closed the World Youth Day before a crowd estimated at 700,000, including the presidents of Portugal, Colombia, Costa Rica, El Salvador, Guatemala, Honduras and Panama.

Pope Francis stressed in his final remarks: “The venue for the next World Youth Day has already been announced. I ask you not to let the fervor of these days grow cold.”

“Go back to your parishes and communities, to your families and your friends, and share this experience, so that others can resonate with the strength and enthusiasm that is yours,” he said. “With Mary, keep saying ‘yes’ to the dream that God has sown in you. And, please, do not forget to pray for me,” Francis concluded.

Cardinal Kevin Farrell, who is in charge of overseeing the once-every-three-year festival, proclaimed at the end of the World Youth Day Mass, “Nos veremos em Portugal!”

According to Cardinal Manuel Clemente of Lisbon, president of the Portuguese Episcopal Conference (CEP), the CEP had formally submitted a proposal to the Vatican to host the World Youth Day in Portugal’s capital city.

“It will be a success for the Church and for Portugal,” said Leopoldina Simões, former coordinator for the Social Communication Center of the Fátima Sanctuary.

She also stated, “The World Youth Day in Lisbon will be a unique opportunity to make known the Portuguese Catholic reality to the world,” and she added, “The Portuguese will also be able to witness one of the richest Catholic events in the world, in spiritual and cultural terms, because there are always countless young people coming from different cultures and countries, all with the same faith in God and trust and connection with the Pope.”

Pope Francis visited Portugal in 2017 to mark the 100th anniversary of the Virgin Mary’s appearance at Fatima. Pope Paul VI visited the Marian Sanctuary in May 1967, on the fiftieth anniversary of the first apparition, followed by Pope John Paul II in May 1987, and Pope Benedict XVI in May 2010.