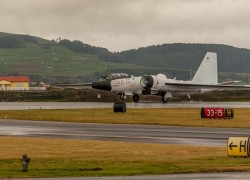 US Congressman Devin Nunes (R-CA) said today in Terceira, Azores, that it is essential and possible to find a “long term solution” to the Lajes Field state of affairs by reviewing the US policies announced in January regarding the US military outpost on the island.

Congressman Nunes is leading a delegation of members of the United States Congress visiting Terceira on a facts finding mission to evaluate the current status of the Lajes Field.

In January the United States Secretary of Defense, Chuck Hagel, announced the Pentagon’s decision to downsize the US presence in the Lajes Field. The visit is taking place at a time of tense bilateral relations between Portugal and the United States, following the announcement.

The downsizing plan includes the withdrawal of 500 US military personnel from US Lajes Field and the laying-off of an estimated 700 Portuguese civil workers. Lajes Field is the second largest employer on the island and downsizing the base will significantly impact the local economy. The move will save the Pentagon an estimated $35 million annually,

Rep. Nunes, who is of Azorean descent, is the Chairman of the Subcommittee on Trade of the House Ways and Means Committee. The Committee has jurisdiction over taxes, international trade, Social Security, and Medicare. The jurisdiction of the Subcommittee on Trade also includes tariffs, import and export policies, customs, international trade rules, and commodity agreements.

In January 2015, a bipartisan group of US lawmakers, led by Rep. Devin Nunes,  expressed concern regarding  the Defense Department plan to downsize the Lajes Field in Terceira.

In April 2014, Rep. Devin Nunes introduced a bill in the House of Representatives to keep the Lajes Field operational.

First elected to Congress in 2002, Congressman Nunes represents parts of Tulare and Fresno Counties, California, and also serves on the House Permanent Select Committee on Intelligence.