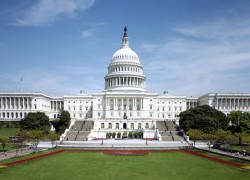 A bipartisan group of US lawmakers has expressed concern that “the Defense Department’s plan to downsize the Lajes Field in Terceira, Azores, will harm U.S. relations with Portugal,” the Air Force Times reported today.

According to Rep. Devin Nunes (R-CA), a member of the Congressional Portuguese American Caucus, “We are nervous about how the Portuguese are going to react because this has become a political issue for them and – bottom line is – it harms them greatly,” he told the Air Force Times.

Nunes, who has roots in the Azores, “is worried that the Portuguese may limit U.S. access to Lajes Field or tell the U.S. to demolish inactive parts of the base rather than accept a nominal U.S. presence” said the Air Force Times.

“They’ve been saying for three years now, since this first announced: ‘This doesn’t work for us; you can’t just leave us an empty base sitting there with fuel tanks and munitions stores and all this stuff,'” Nunes said in the interview. “I don’t know if you’ve seen the base; it’s huge. So they’ve said, ‘Look, if you’re going to do that, you’re going to have to come in and tear this out,” the Air Force Times reported.

Nunes also revealed that both US and Portuguese officials “are expected to meet in February to discuss the latest proposed personnel reductions at Lajes Field” and that “Lawmakers are waiting on the results of that meeting before deciding whether to take legislative action to resolve the issue.”

“We’re going to have decide as members of Congress: Do we need to step in and tell DOD, ‘Well, since you didn’t solve the problem, here’s what you’re going to do,'” he said. “We don’t want to do that, but we’re prepared to do it.”

The Air Force Times also reported that “In April, Nunes introduced a bill that would have moved the Special-Purpose Marine Air-Ground Task Force Crisis Response from Moron Air Base, Spain, to Lajes Field.” According to the report, the bill did not receive enough support for a vote in either chamber.

Early in January, the United States Secretary of Defense, Chuck Hagel, had confirmed the Pentagon’s decision to downsize the US presence in the Lajes Field. Reacting to Hagel’s pronouncement, the President of the Government of the Azores, Vasco Cordeiro, expressed his frustration by denouncing the Pentagon’s decision as “a monumental slap in the face of the Portuguese Government.”

The decision will save the Pentagon an estimated $35 million annually. Downsizing the Lajes Field, the island’s second largest employer, will significantly impact the local economy.

Related on the Web: Global Security.org