The President of the Parliament, Augusto Santos Silva, announced Thursday that following a formal invitation, Ukrainian President Volodymyr Zelensky will address the Assembly of Republic on a date to be scheduled.

The announcement was made, after the Ambassador of Ukraine in Lisbon, Ihnna Ohnivetz, met formally with Augusto Santos Silva.

Santos Silva has stated, “This morning I received the Ambassador of Ukraine in Lisbon, who informed me of President Volodymyr Zelensky’s availability to participate in a session of the Assembly of the Republic. The date will now be set.” 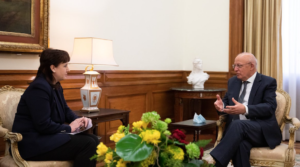 The invitation, proposed by the PAN party, was approved by an Assembly majority this Wednesday, with the PCP being the only party to vote against. The President of Portugal, Marcelo Rebelo de Sousa, has approved the Parliament’s decision without delay.

A solemn session to welcome the president of Ukraine, will take place through a videoconference, following a similar format similar as it has happened in other parliaments around the world.

Inês de Sousa Real, spokesperson for PAN, highlighted “the bravery and heroism of the resistance carried out by the Ukrainian people” stressing that, “given the evolution of this war, solidarity with the Ukrainian people and the struggle for a sovereign, independent, free and European Ukraine requires more symbolic diplomatic gestures on the part of all countries committed to such designs.”

“Portugal will respond to Minister Dmytro Kuleba ‘s request, namely in terms of sending more arms and ammunition. We don’t have heavy weapons that we can supply, other countries will and we, collectively, will support them,” Cravinho remarked at the end of a two-day meeting of the foreign ministers of the Atlantic Alliance, in which the Ukrainian minister participated.

As for the urgency in sending weapons demanded by the Ukrainian authorities, the Portuguese minister said he believed that it would be possible to quickly get additional military support to the ground.

It has already been reported that, at the request of the Ukrainian authorities, Portugal will provide military equipment such as vests, helmets, night vision goggles, grenades and ammunition of different calibers, complete portable radios, analogue repeaters and G3 automatic rifles.

Portugal has already sent between 60 to 70 tonnes of military materials to Ukraine and “will send more in the near future,” the Minister of Foreign Affairs, João Gomes Cravinho, said Thursday.

The Portuguese Prime Minister, António Costa, has also said that the country is prepared to send 175 military reinforcements to help Ukrainian soldiers on the ground secure their borders.

Nearly a century after his wrenching death, the Portuguese poet Fernando Pessoa (1888–1935) remains one of our most enigmatic writers. Believing he could do “more in dreams than Napoleon,” yet haunted by the specter of hereditary madness, Pessoa invented dozens of alter egos, or “heteronyms,” under whose names he wrote in Portuguese, English, and French. Unsurprisingly, this “most multifarious of writers” (Guardian) has long eluded a definitive biographer—but in renowned translator and Pessoa scholar Richard Zenith, he has met his match.

“Monumental…. [Pessoa’s writing] was a city that needed a guide. Thanks to Zenith, it has one at last.”
― Benjamin Moser, New York Times Book Review

“The success of Pessoa lies in Zenith’s panoramic approach and his skill in setting Pessoa’s orderly, insular way of life against the riotous backdrop of the early twentieth century…. [and in] elegant, engaging prose that has the propulsive energy of a historical novel fueled by the occasional jolt of surrealism.”
― Anahid Nersessian, New York Review of Books