Ukraine: Nation under attack has full support of the Portuguese people – Portugal 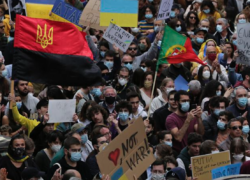 On Sunday, the Portuguese President, Marcelo Rebelo de Sousa, was in a telephone conversation with the Ukrainian President, Volodymyr Zelensky, where the current situation in Ukraine was addressed.

According to an official note, “The President of the Republic reiterated the vehement condemnation of Portugal and solidarity for the courageous Ukrainian resistance. This support has been implemented by the government, namely through the competent ministries,” said the President who praised “the role of the exceptional Ukrainian community in Portugal.” An estimated 28 thousand Ukrainian nationals have settled in Portugal as laborers in recent years.

“We should respond to this action with a vehement condemnation, with a military response of dissuasion to avoid escalation of this conflict and its expansion to NATO countries but we should continue pursuing diplomatic efforts on all levels,” he said.

It was reported on Sunday that close to 1,800 additional Portuguese military could be mobilized within the next few days to take part in NATO’s dissuasive mission within allied countries on Ukraine’s borders.

The soldiers will be made up of contingents from all three arms of the military (Air Force, Navy and Army). In a second phase, another 472 military could be dispatched, along with 36 tactical vehicles and two Naval war ships.

In addition, the United States has been reinforcing its use of Lajes military air base, on Terceira island, in the Azores, including the storage and maintenance of munitions and conventional explosives,” it was reported.

On Sunday, outside the Russian embassy in Lisbon, thousands of demonstrators held signs and waved flags during a protest the Russian invasion and in solidarity with the Ukrainian people.

Russia has launched a wide-ranging attack on Ukraine on Thursday, hitting cities and bases with airstrikes and shelling. As a result, thousands of civilians piled into trains and cars to flee the unprovoked aggression, while Russian tanks and troops continued to roll across the border launching a “full-scale war” that could rewrite the geopolitical order of the region.

Portugal is one of the 30 nations which are part NATO, considered one of the most powerful military alliances in the world, which mission is to providing rapid defense response to its allies. Under Article V of its charter, the alliance treats an attack on any member nation as an attack on all.

“Portugal supports Ukraine, which is defending itself against an unjustified, illegal and unacceptable invasion,” Defence Minister João Cravinho said in a tweet.

On behalf of Portugal, Foreign Minister Augusto Santos Silva also expressed his solidarity with Ukraine and condemnation of Moscow.

He said, “We have to be prepared for all scenarios. I am sorry to say it, but I cannot say anything else: today we have to work with all scenarios on the table because what is happening is that Putin’s action is not only exceeding his words, but Putin’s action at every moment is also exceeding the maximum that we had foreseen as possible in that action.”

Santos Silva remarked that “whatever the objective” of the Russian offensive, “it is illegitimate, it is illegal, and it is condemnable,” describing it as “the biggest security crisis that Europe has gone through since World War II.”

After Ukrainian President Volodymyr Zelensky stated that martial law was imposed across Ukraine, the Portuguese Government has advised its estimated 200 citizens in Ukraine to leave.

“Given the possible worsening of the security situation in the country and possible suspension of commercial flights, we advise Portuguese citizens who are in Ukraine and do not have a pressing reason to stay, to leave the country while they can do so through normal routes,” said a note published on the Portal das Comunidades Portuguesas.

In a new development, following a meeting in Brussels on Sunday, the Portuguese Secretary of State for Internal Administration, Patricia Gaspar, stated that although Portugal has not yet determined the number of Ukrainian refugees it can host, the country is open to receive them.

It has been estimated by the European Commission that 5 million Ukrainian refugees will be reaching the external borders of the European Union soon.

Carolina Matos/PAJ/Editor / This developing story will be updated