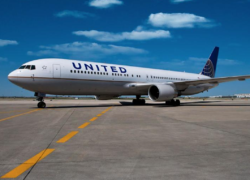 According to the Azores Tourism Association (ATA), United Airlines will offer 114 seasonal flights, to last throughout the summer, from 13 May to 3 June, to the end of September, with three weekly frequencies on Wednesdays, Fridays and Sundays, and daily flights from 4 June to 28 September, 2022.

“It is a great opportunity for the tourism sector of the Azores as the United States of America is the second outbound international market for tourists in the Azores and United is one of the most important American airlines,” said Carlos Morais president of ATA.

The inaugural flight will be welcomed, May 14, by the President of the Government of the Azores, José Manuel Bolieiro, the US Consul in Ponta Delgada, Kathryn Hammond, and the Senior Vice-President of International Network and Alliances at United Airlines, Patrick Quayle. ANA Aeroportos de Portugal / VINCI Airports is represented at the occasion by the José Luis Alves, the Airport Director, and Francisco Pita, Chief Commercial Officer (CCO) of ANA.

The Azores are served by its own airline, SATA International/Azores Airlines, offering six direct flights a from Boston (Massachusetts) (Monday through Sunday except on Saturday), and two flights a week (Wednesday and Saturday) from Toronto, (Canada). The Boston/Ponta Delgada route operates in partnership with Jetblue, so that Azores Airlines customers may reach other destinations within the US.

British Airways has also announced plans to flying non-stop from London Heathrow to São Miguel and Terceira islands in the Azores. The São Miguel route will start on July 2 and will run until September 3, while services to Terceira will run from July 10 until August 28. The airline will fly to the islands once a week (on Saturdays and Sundays respectively). These new direct flights by British Airways to the Azores will offer travelers an alternative to flying via Lisbon.