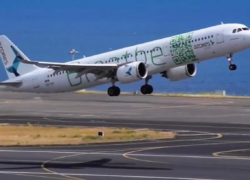 SATA Azores Airlines has announced it will start a new route linking New York to Ponta Delgada, from June 4 to October 28, 2022, on Wednesdays, Thursdays, Fridays and Saturdays.

According to the announcement, the planning of the new route has been under consideration for over a year, a process that was interrupted by the outbreak of the Covid-19 pandemic.

SATA also revealed that reservations are already available and can be made online or through travel agents.

The new route was planned in partnership with Azores based operator, Inovtravel, which has launched the first flight between Madeira (Funchal), and New York (FJK), starting November 29 and available until March 23, 2022.

SATA Azores Airlines has also announced that, between now and the end of the year, it will be operating 16 flights between Boston and Ponta Delgada, including 6 additional flights to Cape Verde as a destination. The overwhelming majority of the estimated 3,000 passengers are families planning to spend Christmas and New Years in the Azores.

A subsidiary of SATA Group, the Azores Airlines main routes to North America have revolved around Ponta Delgada and Terceira in the Azores, to Boston and Toronto. Headquartered in Ponta Delgada, on the island of São Miguel, SATA also operates international destinations such Paris, Frankfurt and Bermuda.