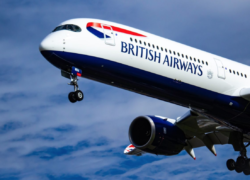 British Airways has announced plans to fly non-stop from London Heathrow to São Miguel and Terceira islands in the Azores.

The São Miguel route will start on July 2 and will run until September 3, while services to Terceira will run from July 10 until August 28.

The airline will fly to the islands once a week (on Saturdays and Sundays respectively), with flights operated by A320 aircraft fitted with 180 seats.

These new direct flight by British Airways to the Azores will offer travelers an alternative to flying via Lisbon.

Commenting on the route launch, Neil Chernoff, British Airways’ Director of Network and Alliances, said, “After a difficult 18 months, it’s fantastic to be in a position to launch two new routes next summer from Heathrow. These two Islands in the Azores will be the perfect addition to our network, offering more choice in one of the most popular regions in Europe for British sunseekers.”

British Airways also highlighted that the Azores is the first archipelago in the world to be certified as a sustainable destination by Earth Check.

The Azores own airline, SATA, will operate a direct flight from Gatwick, UK, to São Miguelon Saturdays, from May through October.

Recently, British Airways has resumed flying from Heathrow to the Canadian cities of Montreal and Vancouver. These new destinations join the route Heathrow-Toronto, which restarted in August. Gatwick-Toronto continues to be operational. Conversely, Gatwick-Toronto remains closed.

British Airways is the flag carrier airline of the United Kingdom. It is headquartered in London, England, near its main hub at Heathrow Airport. The airline is the second largest UK based carrier, based on fleet size and passengers carried, behind easyJet. The carrier has its home base at London Heathrow, the world’s busiest international airport, and flies to more than 170 destinations in 70 countries with a fleet of more than 280 aircraft.