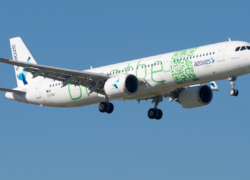 The Terceira-New York route will be available on Mondays, between until September 5, 2022. Accordingly, on Tuesday, the first 174 passengers disembarked at Lajes Airport, bound for several Azores islands.

SATA Azores Airlines has also resumed its direct seasonal flights between Lisbon and Oakland, California, be carried out once a week on Tuesdays in partnership with EuroAtlantic Airways. The route returns to Oakland after a nine-month suspension.

Recently, SATA Azores Airlines, has launched a Wednesday-only direct service between Terceira (Lages) and Montréal, which will run until September 14. The route, which hasn’t been served before, is principally serve the Azorean diaspora in Canada.

These new routes follow the recent inauguration of the SATA Azores Airlines route between New York (JFK) and Ponta Delgada. This is a regular connection, which the airline will operate on Wednesdays, Thursdays, Fridays and Saturdays.

Meanwhile, the airline is already flying from New York to Funchal (Madeira Island) in partnership with the Azorean operator InovTravel.

According to the Azores Tourism Association (ATA), United Airlines will offer 114 seasonal flights, to last throughout the summer, from 13 May to 3 June, to the end of September, with three weekly frequencies on Wednesdays, Fridays and Sundays, and daily flights from 4 June to 28 September 2022.

The Azores are served by its own airline, SATA International/Azores Airlines, offering six direct flights a from Boston (Massachusetts) (Monday through Sunday except on Saturday), and two flights a week (Wednesday and Saturday) from Toronto, (Canada). The Boston/Ponta Delgada route operates in partnership with JetBlue, so that Azores Airlines customers may reach other destinations within the US.