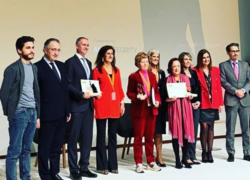 Magistrate Maria José Morgado was recognized the top recipient of the “Prémio Tágides” [Tágides Award] for her active role in the fight against corruption in Portugal. She was distinguished with two prizes in the categories of “Political Initiative” and “Investigation”.

Promoted by the “All4Integrity” initiative, the “Prémio Tágides 2021” is the first anti-corruption award given in Portugal, aiming to recognize the work of people active in fighting corruption.

“I am extremely ashamed to receive an award that seems, in my case, to be completely meaningless, as long as the fight for integrity, for ethics, is like the air I breathe,” Morgado said.

The winners of the first edition of the anti-corruption prize were announced this Wednesday, at a ceremony held at the Champalimaud Foundation, in Lisbon.

The All4Integrity movement founder, André Corrêa d’Almeida, professor at Columbia University, New York, considers that the fight against corruption in Portugal is far behind when compared to other countries of the European Union.

At the opening ceremony, André Correa d’Almeida stated that All4Integrity believes that “Portugal can be a national and international reference in the prevention and fight against corruption and related crimes.”

Under the motto “Free my country from corruption” the goal is to establish a National Integrity System in Portugal, with the aim to “Identify, recognize, celebrate, and reward the work carried out by individuals, organizations and institutions, in the prevention and fight against corruption in Portugal.”

The Tágides Award mobilized more than 350 Portuguese citizens nationwide to nominate people and projects that inspired them in the promotion of a national culture of integrity.

The European Parliament has estimated that corruption in Portugal costs about 8 to 10% of the Gross Domestic Product (GDP), which represents approximately 20 billion euros. According to GRECO, the Council of Europe entity that monitors the fight against corruption, in 2019, only one of the 15 anti-corruption measures recommended in 2016 was fully implemented in Portugal.

In addition, a survey carried out in 2019, by the Flash Eurobarometer, revealed that favoring friends and/or family members in public institutions (59%) and in businesses (55%), as well as paying bribes (34%), are the most common practices in Portugal.

André Corrêa d’Almeida is an adjunct professor at Columbia University in New York, where he teaches at the School of International and Public Affairs (SIPA) and is an assistant director of the Master of Public Administration in Development Practice. He holds a doctorate from the University of Denver, Colorado, a master’s in Management from the University of Saint Joseph (China), and a degree in Economics from the Universidade Nova de Lisboa. He was a senior advisor to the United Nations Development Program of the UN and currently advices de New York Academy of Sciences on Artificial Intelligence (AI). He is a regular contributor to the Apolitical, the Huffington Post, The Guardian and Publico. He is the editor and co-author of the books Smarter New York City: How City Agencies Innovate (Columbia University Press, 2018) and Reform of the Parliamentarian System in Portugal: Analyses and Tools for an Urgent Dialogue (Principia Editora, 2019).