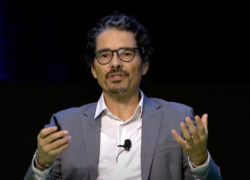 André Corrêa d’Almeida lives and works in New York City. Even though he has lived in the United States for more than fifteen years, he is connected to Portugal. Recently he decided to take to the streets of the City to call attention to corruption in Portugal. He strongly believes corruption is the most significant barrier to the country’s growth and development.

Corrêa d’Almeida is not alone and corruption is not a specific problem to Portugal. He has joined forces with Transparency International (TI), a non-governmental organization present in more than 100 countries, which purpose is to take action to combat institutional corruption globally. Accredited as a Non-Governmental Organization for Development (NGDO), TI established a branch in Portugal, Transparency International.PT, in 2010.

Unlike the United States, and many other developed countries, TI claims that Portugal lacks a legal system equipped with the legal tools to combat and regulate corruption at all levels of the public and private sectors and although it is common knowledge that corruption exists, there is no will to change the status quo.

André Corrêa d’Almeida is an adjunct professor at Columbia University in New York, where he teaches at the School of International and Public Affairs (SIPA) and is an assistant director of the Master of Public Administration in Development Practice. He holds a doctorate from the University of Denver, Colorado, a master’s in Management from the University of Saint Joseph (China), and a degree in Economics from the Universidade Nova de Lisboa. He was a senior advisor to the United Nations Development Program of the UN and currently advices de New York Academy of Sciences on Artificial Intelligence (AI). He is a regular contributor to the Apolitical, the Huffington Post, The Guardian and Publico.

He is the editor and co-author of the books Smarter New York City: How City Agencies Innovate (Columbia University Press, 2018) and Reform of the Parliamentarian System in Portugal: Analyses and Tools for an Urgent Dialogue (Principia Editora, 2019).

Established by the United Nations in 2003, the International Anti-Corruption Day is celebrated on December 9, worldwide, to raise awareness to combating and preventing corruption.

Q. Would you describe briefly what is your role in Transparency International and why you are taking action in New York now?

A: I do not have any role in/with TI. My goal is to create a people’s movement to demand the implementation and assessment of widely accepted, among national and international experts, anti-corruption legislation and policies in Portugal. While corruption is a global poison, that undermines democracies and the legitimate aspirations of their people — it is not specific to Portugal — Portuguese authorities are far from doing enough, as often demonstrated by different independent studies.

There is an unacceptable and extractivist institutional immobilism on the part of the Portuguese legislators that needs to be combated at all cost. When corruption is deepening inequality in Portugal, and making the country overall poorer, the government presents a 20-24 anti-corruption strategy that TI-PT classifies to be vague, weak, narrow minded and lacking ambition.

The second goal of #freemycountryfromcorruption #libertemomeupaísdacorrupção #portugal is to help coordinate civil society. While there are hundreds of people actively engaged in anti-corruption campaigns, studies and initiatives, the degree of coordination among them is astoundingly insufficient, to properly create the type of collective action needed to force the legislator to act seriously against corruption. 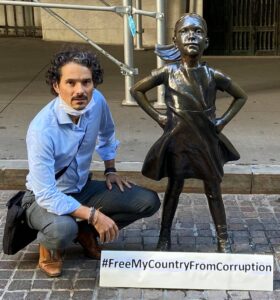 Q. Established by the United Nations in 2003, the International Anti-Corruption Day is celebrated on December 9, worldwide, to raise awareness to combating and preventing corruption. Are you planning to be involved?

A. Absolutely! I have been promoting this International Day for weeks now, with a special focus on helping teachers, of all education levels, create pedagogical activities to mobilize their students. The youth is also involved, and I have several of them running our social media platforms. In addition, on this day I’ll be walking on Broadway Avenue, in Manhattan, from downtown to Columbia University campus in the northern part of Manhattan, to raise awareness for what I consider to be the #1 cause of poverty and underdevelopment in Portugal.

Q. Portugal has been described by TI as a country lacking basic anti-corruption regulations. Where do you think the main problems are and what needs to be changed?

A. Overall, the main problem, as explained above, is the lack of political will and the lack of check & balances between the different State entities. With the exception of the Courts, all other three State entities – Government, Parliament and President – seem aligned in not fighting corruption at least in the last 20 years.

There is also a tremendous problem with the civil society that hasn’t been able to find a way to be an effective actor. It is not enough to write books, articles, posts on social media, give interviews, etc. Civil society needs to get together and make its collective voice heard in the streets. I live in NYC; these are the streets where I project my voice and my refusal to stand still.

My anti-corruption manifest includes 14 items but two are the most critical ones (moreover if one wants to think about priorities): conflict of interests in public offices; revolving doors between public offices and jobs in the private sector, and vice versa.

Q. It has been said that the Portuguese society is too passive, that people have adapted to the current state of affairs. What needs to be done to promote more awareness?

A. I discuss that above. For reasons that we cannot discuss here today, there is a very limited civil society tradition in Portugal. Two things can be done though: (i) regular evaluations of the corruption situation in Portugal to (ii) legitimate the leadership role of those who try to mobilize and coordinate civil society. There is, of course, some traits in the Portuguese society that makes this mobilization particularly challenging. We will leave this discussion for another occasion.

I have been working with Parliamentarians for several years (see here) and I know that if they feel an organized pressure, they will legislate against corruption more seriously.

Q. According to the TI assessment, apparently there is a general concern that the Covid’19 situation in Portugal could invite to more institutional corruption, regarding the about USD$1.2billion of EU Cohesion policy funding to support Portugal’s economic recovery. Are you also concerned?

A. The very high risk exists and, unless some of the points of my manifesto are adopted, we’ll move from a risky situation to a drastic reality. Last week the President of Portugal vetoed the government proposal according to which the adjudication of public works would be less transparent and difficult to monitor. Also, a couple of weeks ago the Parliament approved, against the will of the party in power and its government, the development of an online platform to promote transparency about the use of EU funds. As you can see none of this makes sense. Why would a government, supposedly fighting corruption, not want the disbursement of EU funds to be openly transparent? Of course, we understand why… because Portugal is a highly corrupted country, specifically in the public sphere.

Q. The European Commission has argued recently that Portugal needs to improve the means to achieve more transparency, namely in the Portuguese judicial system which needs to become more efficient in fighting institutionalized corruption. Would you like to comment?

A. The reform of the judicial system is one of my 14 demands. According to EU’ GRECO, Portugal adopted only 6,7% of the highly recommended anti-corruption measures. The system is corrupted by design. There is good news though. We can redesign it!

Q. You have said that the embezzlement of money by institutional corruption is the main cause of the poverty of millions of Portuguese people, due to the failing of public governance, lack of resources management, social justice and generalized inequality. Would you offer a few examples?

A. International studies show — not surprisingly I prefer science instead of prejudice, beliefs and bias — that public-private partnerships have been ruinous for the country, due to conflict of interests among those who simultaneously negotiate on behalf of the State and on behalf of private entities. Namely: (1) Regulatory authorities (energy, banks, telecommunications) that operate not independently from private interests; (2) Recruitment for top public offices characterized by astounding levels of nepotism invariably involving same-family members; (3) Judicial system very slow very easily allowing the prescriptive period of legal causes to expire for those with the financial resources to hire seasoned lawyers; (4) Lobbying not regulated; (5) Electoral system that protects the status quo and political elites instead of high-quality democratic representation; (6) Courts with lack of capacity for, as an example, supervise political parties funding.

Q. Do you consider institutionalized corruption to be one of the main reasons for the recent emerging of more radical political forces, such as populist forces, energizing the grassroots against the establishment?

A. Yes. It is the inertia, the incompetence and the lack of willingness of the traditional political parties — the two that have been running the country since the 1974 Revolution — which created the conditions, with the support of polarizing social media algorithms, for rightist populist forces.

Q. Which are the main TI.PT proposals to promote more transparency in the democratic process in Portugal. What is missing and how can it be achieved?

A. I do not represent TI.PT. Political will and civic engagement is what is missing. Many entities, national and international, have over the years proposed anti-corruption action that political authorities in Portugal do not follow. Examples can be found at Transparency International.PT and TI-PT Contributos; and GRECO, among many others. In the case of GRECO, the Council of Europe anti- corruption body, only 1 in 15 recent recommendations was effectively implemented in Portugal.

Q. Portugal is run by an inefficient semi-presidential representative democracy, where the President has limited powers and the Prime Minister is the head of government. The Portuguese are going to elect a new president on January 24th, 2021. Would you like to see the current system changed?

A. It is not a matter of liking or “likes” — it needs to change. If it does not, Portugal will soon lose its sovereignty once again. In the 16thcentury Portugal lost his independence to Spain and in the last 40 years three times to international organizations. It will continue to happen… the new “Felipes” are taking new forms… I am working on some new ideas to help change the current situation, and I’ll need the support of the Portuguese diaspora in the US and abroad.

Q. What can the Portuguese American community do support your effort?

A. The effort is not only to denounce corruption, but also and mostly, to denounce the inertia of the legislators unwilling to implement and evaluate most needed and effective anti-corruption policies and measures to encourage/motivate people to mobilize against corruption and political immobilism.

My #freemycountryfromcorruption and #libertemomeupaísdacorrupção team in NYC, in Lisboa and Porto, is growing and now I am looking for support to help me fundraise in the US. I want to engage the youth more and expand outreach to help civil society come together and coordinate action. If people think they can help shoot me an email at andrecdalmeida@gmail.com

Carolina Matos is the founder and editor of the Portuguese Portuguese American Journal blog online. From 1985 to 1995, she was the editor–in-chief for The Portuguese American Journal in print;  from 1995 to 2010, she was a consultant for Lisbon based Luso-American Development Foundation (FLAD).  She graduated with a Bachelor’s Degree in Liberal Arts and a Master’s Degree in English and Education from Brown University and holds a Doctorate in Education from Lesley University. She was an adjunct professor at Lesley University where she taught undergraduate and graduate courses. In 2004, Carolina Matos was honored with the Comenda da Ordem do Infante D. Henrique presented by Jorge Sampaio, President of Portugal. editor@portuguese-american-journal.com