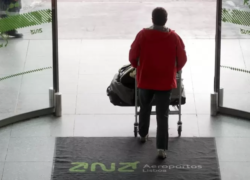 The Foreigners and Borders Service (SEF) has reported that the foreign population living in Portugal has increased in 2020, for the fifth consecutive year, totaling 662,095 foreign born holding a residence permit.

Foreign residents now represent over 6% of the country’s population, the highest value ever recorded.

At the end of 2020, Brazilians remain the main foreign community residing in the country, representing last year 27.8 % of the total, an increase in arrivals of about 22% compared to 2019. The United Kingdom citizens are the second most represented nationality in Portugal.

The settlement of foreigners in Portugal has prevented a population decrease in 2020, offsetting the negative natural balance of 38,931 Portuguese born, and the emigration of 25,886 Portuguese nationals, In 2020, the total resident population of Portugal was at approximately 10.29 million inhabitants. In addition, it is estimated that one third of the Portuguese born population lives abroad.

Currently, to get residency status in the Portugal, foreigners must be a citizen of the European Union or have a study or working visa. Students represent almost half of the visas granted. Few exceptions, such as Golden Visas, are provided through government regulations.