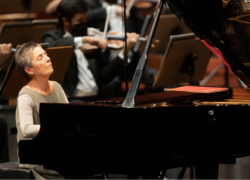 Portuguese virtuoso pianist, Maria João Pires, 77, suffered a “bad fall” earlier on Sunday, in Riga, Latvia, and was taken to hospital. She was due to perform a recital as the closing concert of the Riga Jūrmala Festival that evening, at the Latvian National Opera.

According to a Riga Jurmala Music Festival source, she was “getting ready to return home and it will be known soon how long she needs to wait, before she is fully recovered.” Other sources have reported that she had been discharged from hospital and was resting at home.

Maria João Pires was born in Lisbon, Portugal, on July 23, 1944. She gave her first recital at the age of five and made her first public performance of Mozart’s Piano Concertos at the age of seven. At the age of nine she received Portugal’s highest award for young musicians. She gained international fame in 1970, after winning the Beethoven Bicentennial Competition in Brussels.

One of the world’s greatest piano performers, she is one of the most acclaimed interpreters of Mozart and Schubert. In 2014, she was nominated for the 56th Grammy Awards in the “Best Classical Instrumental Solo” category, for her interpretation of Schubert: Piano Sonatas D. 845 & D. 960. This was the second time Pires was a nominee for a Grammy. She was first nominated in 2009.