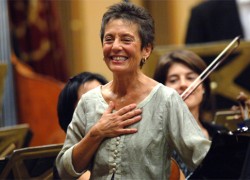 This is the second time Pires is a nominee for a Grammy. She was first nominated in 2009. The awards ceremony will take place on January 26, 2014, in Los Angeles.

Maria João Pires was born in Lisbon, in 1944. She studied at the Lisbon Conservatory with Professor Campos Coelho and was a student of Francine Benoit. From 1953 until 1960, she continued her studies in Germany, first at the Munich Music Academy with Rosl Schmid, then in Hanover with Karl Engel.

Considered one of the greatest piano concert performers in the world, she gave her first recital at the age of five and made her first public performance at the age of seven with Mozart’s Piano Concertos. At the age of nine she received Portugal’s highest award for young musicians. She gained international fame in 1970, after winning the Beethoven Bicentennial Competition in Brussels.

A keen performer of chamber music, she has performed works by Bach, Beethoven, Schumann, Schubert, Mozart, Brahms and Chopin among other classical composers. In recent years she has been heard at all the major international festivals including the Schleswig-Holstein Music Festival, the Schubertiade, Tanglewood, Ravinia, Montpellier, Lucerne, Edinburgh and BBC Proms.